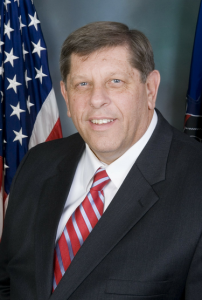 State Rep. Randy Vulakovich will likely soon be State Senator Randy Vulakovich. GOP party leaders named him as their candidate for the seat of ex-Senator Jane Orie, who was convicted over ethics violations earlier this year. The Republican is a favorite in the forthcoming special election.

Vulakovich spent 27 years on the Shaler police force before winning election to the state House in 2006.

“People are looking so much toward government, and the things we need to do to just correct our course we’ve been following here for a long time,” an emotional Mr. Vulakovich said after the vote, according to the Post-Gazette. “It certainly hasn’t gotten us to the right spot.”

“Right now, my focus is on winning and bringing some normalcy back to the 40th District. Later, I can focus on the new Senatorial District. That’s my intention,” he told the Tribune Review.

At a meeting of Allegheny and Butler County Republican conferees Saturday, the Shaler lawmaker defeated former Congresswoman Melissa Hart (who was also Orie’s predecessor in the PA Senate). The numerous candidates dwindled until the fourth round of voting, when Vulakovich defeated Hart 48 votes to 33.

A key shift in the insider campaign came when the Legislative Reapportionment Commission drafted a new state senate map. With the aim of accommodating both candidates for the 37th district, Raja and Greg Parks, the LRC created a new district which includes most of the GOP-leaning North Hills plus Democratic Sen. Jim Ferlo’s Pittsburgh-area home. The newly labeled 38th district contains much of the same population center as the current Orie 40th district seat.

All of a sudden, Republicans had a seat that could stay in their hands through 2014 – the next time it goes to the ballot. By the numbers, the district will favor the GOP challenger to Ferlo. That’s when Vukalovich tossed his hat in the ring, and Hart’s advantage dissolved.

The change also doomed Brown indirectly; she has a difficult case to make to potential campaign donors. Her Wexford home is now in Ferlo’s 38th district, meaning that Dems’ best-case scenario in the special is to add a new Senator in 2012 who they would almost certainly ask to step aside for the 2014 primary.