GOP Puts Up Constitutional Amendment Against Abortion Rights in PA

The Pennsylvania Senate Rules and Executive Nominations Committee late Thursday night added an amendment to Senate Bill 106 that states that residents of the Commonwealth no longer have a right to an abortion.

Introduced by Majority Leader Kim Ward (R-Westmoreland), the amendment states that “this constitution does not grant the right to taxpayer-funded abortion or any other right relating to abortion.”

The amendment passed through the committee by a party-line vote of 11-6. 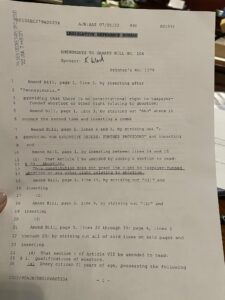 SB 106, introduced by Sen. Dave Argall (R-Schuylkill), originally called for gubernatorial candidates to select their own running mate. The bill was altered to require voters to present valid identification prior to voting, before adding the Ward amendment.

The bill will move to the entire Senate for approval.

According to the Commonwealth’s constitution, amendments may be proposed in the Senate or the House of Representatives. If the amendment passes in two consecutive sessions of the General Assembly, the amendment goes to Pennsylvania voters on the ballot at least three months after agreement. These amendments do not require the governor’s signature to be referred to the ballot.

Pennsylvania is one of 24 states that does not feature a process for citizen-initiated measure, such as ballot initiatives or veto referendums, at the statewide level. Of the original 13 states, only Maryland and Massachusetts feature the power of the initiative.

Ballotpedia reports that the Pennsylvania Constitution has been amended approximately 49 times since the most recent Constitution was adopted in 1968. The most recent amendments were approved by voters in 2021, including checks on the governor’s emergency powers.

The ballot initiative is a means by which citizens may propose to create, amend, or repeal a state law or constitutional provision through collecting petition signatures from a certain minimum number of registered voters. Successful initiative petition efforts result in the proposal being presented to voters within a state or other local government jurisdiction. Ballot initiatives are also referred to as ballot measures, popular initiatives, voter initiatives, citizen initiatives, and propositions.

Veto referendums are a type of citizen-initiated ballot measure that asks voters whether to uphold or repeal a law passed by the state legislature, a city council, a county board of supervisors, or other legislative body.

This is a developing story.