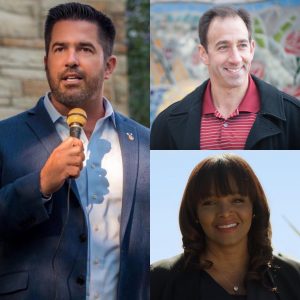 Resign is the party line.

Three leading Republican hopefuls for the 2022 U.S. Senate race in Pennsylvania are calling on President Joe Biden to either resign or be removed from office following the terrorist attack in Kabul, Afghanistan that resulted in 13 U.S. service members being killed.

Kathy Barnette, Jeff Bartos, and Sean Parnell shared messages on social media on Thursday, shortly after the terrorist attack, calling for Biden to step down from the presidency.

“Joe Biden has lost the moral authority to lead our nation. Americans are now dead because of his incompetence. It didn’t have to be this way. He should resign as Commander in Chief,” wrote Parnell, a combat veteran, author, and former congressional candidate, on Twitter. The video he posted on his thoughts on the attack has nearly 380,000 views as of Tuesday afternoon.

Joe Biden has lost the moral authority to lead our nation. Americans are now dead because of his incompetence. It didn’t have to be this way.
He should resign as Commander in Chief. pic.twitter.com/oka0zSLaBK

Parnell has continued to make the rounds on conservative media outlets slamming the Biden administration’s handling of the matter in Afghanistan, which has also included Donald Trump Jr. sharing one of his interviews.

“This was entirely avoidable and Biden should resign or be impeached,” wrote Barnette, a veteran, conservative commentator, and former congressional candidate, in a tweet.

Now it’s being reported 10 US marines were killed at the airport with more attacks likely to follow. This was entirely avoidable and Biden should resign or be impeached. https://t.co/xue5SlZtZn

She followed up that tweet shortly after with an 8 minute video, which has 134,000 views as of Tuesday afternoon, captioned, “Biden must resign now” on Twitter.

“Joe Biden has failed our troops. He has failed our country. Enough is enough. Joe Biden must resign or be removed from office,” Bartos, a Montgomery County real estate developer who was the GOP Lt. Governor nominee in 2018, wrote in a tweet.

How many more American lives will be lost before this President is held accountable?

Bartos also sent out a tweet on Friday echoing a message from Tennessee Sen. Marsha Blackburn saying that there is “absolutely no reason why” Sec. of State Antony Blinken and Deputy Sec. of State Wendy Sherman “should still have jobs in this administration.”

“This is on Biden. My prayers are with these service members and all of those injured in this deadly, preventable attack,” Sands wrote on Twitter.

The Sands campaign did not respond with a comment to PoliticsPA when asked if she is calling for Biden to resign or be removed from office.

While three leading Republican candidates are calling for Biden to step down from the presidency, most elected Republicans have struck a bit of a different tone.

GOP Sen. Pat Toomey, who is not seeking reelection in 2022, criticized the Biden administration’s actions in Afghanistan, but didn’t go as far as calling for him to resign.

“The heinous terror attack on the airport in Kabul is as heartbreaking as it is infuriating. My prayers are with our troops, our fellow citizens, and innocent Afghans on the ground,” Toomey wrote on Twitter. “This must be a wakeup call for the administration to lift its arbitrary deadline and take every step necessary to ensure we leave no American or deserving Afghan behind.”

According to Forbes, “nearly two dozen House and Senate Republicans on Thursday” called for Biden to resign or be removed from office.

“Right now, our nation’s priority needs to be securing the Kabul airport and getting Americans home safe — not craven and useless political attacks,” said Brendan Welch, in a statement to PoliticsPA.

Several leading Democrats also weighed in on the matter offering their prayers to the families impacted by the terrorist attack, but didn’t criticize the Biden administration.

Fetterman, in his first comments on Afghanistan that I’ve seen, says “Today’s tragic events and senseless deaths underscore how critical it is for us to end this 20 year war and finally end American bloodshed in Afghanistan.” pic.twitter.com/qF8KZg388M

“Crushed by the loss of fellow Marines today in Afghanistan. Marines are the first to fight, & they exemplified that commitment — staying in a war zone, determined to succeed in their mission. I offer my deepest condolences to their loved ones & family at home & in the Corps,” Rep. Conor Lamb (D-Allegheny), a Marine veteran, wrote on Twitter on Thursday afternoon. “There are a lot of questions that need to be answered about how this operation has unfolded and what lies ahead. But right now we all must be laser-focused on doing whatever it takes to get all of our people to safety.”

“I grieve with our entire nation over the senseless and tragic deaths of our heroic service members killed in a cowardly act of terrorism in Kabul,” Lt. Gov. John Fetterman said in a press release. “These brave soldiers died securing and guarding the crucial, just and solemn work of evacuating over 80,000 Americans and our Afghan allies. We must now complete the mission of evacuating Americans and our allies.”

“Today’s tragic events and senseless deaths underscore how critical it is for us to end this 20 year war and finally end American bloodshed in Afghanistan,” Fetterman continued.

“Heartbroken by the loss of U.S. servicemembers in today’s attack, and grateful for our troops and the medical personnel working to care for the injured and keep others safe. We must keep working to evacuate Americans, partners, and allies,” Montgomery County Commissioner Val Arkoosh wrote on Twitter.

“Every day, our troops literally put their lives on the line for America and our values. Today, twelve service members made the ultimate sacrifice. I’m praying for their families, for their memories, and for peace as we continue evacuations from Afghanistan,” State Rep. Malcolm Kenyatta (D-Philadelphia), tweeted on Thursday.