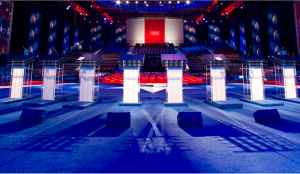 John Hanger, Jo Ellen Litz, Katie McGinty, Ed Pawlowski, Max Meyers, Rob McCord, Tom Wolf and Allyson Schwartz will divert their attacks from Governor Corbett and onto each other. They’ve each agreed to participate in the PA Progressive Summit in February.

The Pa. Progressive Summit will be held February 28 and March 1 at the Harrisburg Hilton, with the debate scheduled for Friday at 6:00pm. Candidates will take questions from progressive leaders in the audience and sponsoring organizations of the event.

“We are excited about the impact that our gubernatorial debate will have,” said Eileen Connelly, Chair of the Board of Keystone Progress. “This is an incredible opportunity for the progressive community to set the agenda for the entire campaign.”

Technically, this will be the second debate for the Democratic primary candidates, as they were all invited to a debate hosted by a Harrisburg community group back in June. Only Max Myers and John Hanger actually participated. Schwartz was in a voting session in DC, McGinty and McCord declined, though McCord was still undeclared at that point.

Despite the event’s poor candidate attendance, Myers and Hanger didn’t waste the opportunity to chastise their opponents for not participating.

Hanger questioned, ”If you are not ready to do this debate why are you ready to run for governor?”

Myers quipped, ”The risk is too high for those who aren’t here.”

The Progressive Summit debate promises to be better attended, though Jack Wagner and Mike Stack have yet to respond to their invitations.