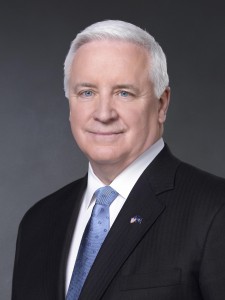 Governor Corbett issued his first veto last Friday on House Bill 1696, which would have allowed for a moratorium on Washington County real estate reassessment.

“By limiting a property tax moratorium to counties of the fourth class, with a population between 185,000 and 210,000 as of the 2010 United States Census,” wrote Corbett in his veto message, “the bill has restricted its application to one county – Washington County. ”

After consulting with the Attorney General’s office, Corbett told lawmakers that the proposed bill was in violation of Pennsylvania’s Constitution, citing Article III section 32:

The House bill was sponsored by PA Reps. Jesse White, D-Cecil and Brandon Neuman, D-North Strabane.  These representatives said that the bill’s intent was to protect homeowners from the state’s “flawed” method of reassessing property values.

“The passage of the moratorium and the other reform measures will save taxpayer money, provide an opportunity to straighten out the mess, and promote a system where counties can conduct a fair and accurate reassessment,” said White before the veto was announced.

The legislation began as a statewide moratorium, but was amended in the senate to serve only Washington county.  Given the grounds of Corbett’s veto, the Senate’s amendment effectively killed the bill.

The House also passed legislation introduced by White and Neuman which will create a statewide task force to study and reform the reassessment process.

“While this is a setback, I have not given up,” White said, according to Canon McMillan Patch.  “I previously introduced my own statewide moratorium bill in January—House Bill 166—and when the legislature reconvenes in September I’ll be pushing that bill so that we can continue reforming the flawed system and protect homeowners from dramatic property tax increases.”

While White and Neuman are “extremely disappointed,” at least one official supports Corbett’s decision to veto.

“I think the governor did the right thing.” said Rich Fitzgerald, the Democratic nominee for Allegheny County Executive – where property tax reassessment has emerged as a major campaign issue. “All counties need a moratorium. It’s nothing against Washington County. The residents there should get a moratorium, but so should all the other residents in Pennsylvania.”