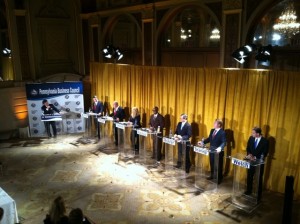 Seven of the nine Republicans vying to face off against Bob Casey met in New York City this weekend, and agreed far more often than disagreed on the issues.

Friday’s debate – the biggest event yet of the 2012 GOP primary for U.S. Senate – was hosted by the Pennsylvania Business Council, moderated by PBC CEO David Patti and featured questions from Tom Fitzgerald of the Philadelphia Inquirer, Colby Itkowitz of the Allentown Morning Call, and James O’Toole of the Pittsburgh Post-Gazette.

Check out the coverage of the debate and the policies discussed in any one of these fine publications:

Buzz after the debate was that it wasn’t much of a game-changer. A huge portion of the audience were operatives or supporters already aligned with one of the candidates. But we’ll see how it plays on PCN.

And here’s how the candidates did. The final grades are not on a universal scale, but weighted according to each candidate’s expectations and objectives.

Tim Burns, Washington County
Background: Businessman; 2010 candidate for congress in Pa-12.
Objective: Having run for federal office in a nationally watched race, Burns had to prove that he is a top tier candidate in this race.
Standout Moment: Discussing the issue of abortion, Burns said it was personal. He revealed that his mother was 16 and his father 18 when he was born.
How He Did:  Burns turned in a solid debate performance and knows the issues.
Final Grade: B

David Christian, Bucks County
Background: Businessman; veterans’ advocate; 2-time congressional candidate in the 1980s.
Objective: The field of candidates is getting away from him, and he needs to establish quickly that he is to be taken seriously.
Standout Moment: Christian had the most captivating moment in the debate, when he revealed that he had been the victim of sexual abuse as a boy during a discussion about Penn State.
How He Did: He was one of the more interesting debaters and made every article about the event. His discussion of the issues didn’t get too deep.
Final Grade: B+

Laureen Cummings, Lackawanna County
Background: Nurse; co-founder of the Scranton Tea Party.
Objective: She has little money, no establishment support, and isn’t the only Tea Party candidate in the race. She needed to get noticed, big time.
Standout Moment: She had a few good lines here and there, but didn’t have a home run moment.
How She Did: She gave many deadpan, no-frills answers from the Tea Party playbook. She should have included frills.
Final Grade: D

Robert Mansfield, Philadelphia
Background: Retired U.S. Army Sergeant and Iraq War veteran; ran for U.S. Senate briefly in 2010.
Objective: He’s got little campaign cash and no establishment support. Forums like this will be his only chance to stand out and he needs to make an impression.
Standout Moment: His introduction was strong, and he drew friendly response as he frequently answered questions with just a “yes,” or a “no,” after other candidates spent their full 90 seconds.
How He Did: He made several factual errors (Qatar is trying to go nuclear?) He didn’t finish having left a strong impression.
Final Grade: D

Sam Rohrer, Berks County
Background: Former State Rep., 2010 candidate for Governor.
Objective: Rohrer has a dedicated following, so his goal in this room was to show that he has the talent to beat Bob Casey and win mainstream voters.
Standout Moment: His discussion of illegal immigration was nuanced and strong. He said the focus should be cutting off government benefits, not rounding up and deporting people.
How He Did: Rohrer came out well, but comments that the government should get out of Medicare would be music to Democrats’ ears if he is the nominee.
Final Grade: A-

Marc Scaringi, Cumberland County
Background: Attorney; former aide to U.S. Senator Rick Santorum
Objective: Scaringi has been on the trail for a year, but has made few gains in fundraising or poll numbers. He needed to show that he deserves to be a candidate.
Standout Moment: He showed his chops when blasted Welch for his position on climate change (more below).
How He Did: Scaringi had a very strong debate. It was clear he knows the issues, knows a variety of ways to criticize Casey along with President Obama, and was even ready to take on his primary opponents.
Final Grade: A

Steve Welch, Chester County
Background: Entrepreneur; 2010 candidate for Congress in Pa-6 and Pa-7.
Objective: Welch has money and a good degree of establishment support. He needed to show that he was in a different league than the other people on the stage, at the same time avoiding comments that would make him seem like a RINO (Republican in Name Only).
Standout Moment: Welch took the most effective tone toward Casey and Obama of any of the candidates. “They just don’t get it,” he reiterated, woven into his own story helping to foster business growth.
How He Did:Welch sounded more like a U.S. Senator than anyone else on the stage. However, during a lightning round of yes-or-no litmus questions, he was the only one to raise his hand when asked if he believes in climate change — the question was whether or not global warming was occurring — though he later said the jury still out as to whether it’s caused by humans.  He was also one of two who said the U.S. shouldn’t seek to deport taxpaying illegal immigrants wholesale.
Final Grade: A-

Tom Smith, Armstrong County
Background: Coal company founder; former Tea Party leader
Objective: Smith is a self-funder, and doesn’t need to risk the exposure of a debate like the one Friday in order to get his name out there. Given the bevy of yes-or-no questions, it might have been the shrewd move.

Bob Casey
The Democratic trackers and operatives at Friday’s debate were treated to quite a show. The candidates opposed the payroll tax cut extension, said they would use an abortion litmus test for federal judges, said they wouldn’t raise taxes under any circumstances, and discussed various ways to alter and/or dismantle entitlements like Medicare. Senator Casey is in the cat bird seat for this race to the right.

John Kensinger, a pharmacist from Bedford who ran briefly for U.S. Senate in 2010, was not able to get off of work. John Vernon, a retired U.S. Army Colonel from Tioga County, missed the debate and Monday announced that he was suspending his campaign.

Casey’s Democratic primary challengers are Brian Kelly, a retired software engineer from Luzerne County who challenged Rep. Paul Kanjorski in 2010; and Joe Vodvarka, a small businessman from Allegheny County who failed do get on the 2010 ballot for U.S. Senate.