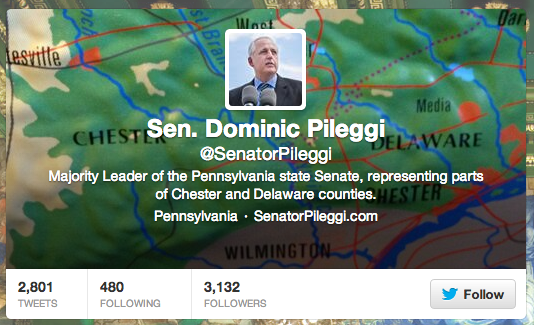 Last month, we took a look at the social media presence of the gubernatorial candidates. This month, we thought we’d examine the records of the state’s legislative leaders.

As in the case of our gubernatorial review, our grades reflect the size and depth of a member’s following as well as the quality of their social media output.

Dominic Pileggi is our winner for a number of reasons. The obvious is that he has the most Twitter followers and Facebook likes of all the other legislators. His accounts are also the most up-to-date and informative. Additionally, the quality of his accounts are above and beyond those of his contemporaries; the State Senate chamber as the background of his Twitter account was a particularly nice touch.

Joe Scarnati has impressive numbers and maintains frequent postings on Twitter and Facebook. The Senator does lose some points, however, on style as both pages are devoid of anything to make them stand out in any way.

Mike Turzai and the others above deserve credit for having both Twitter and Facebook accounts as all the remaining leaders of the State House on this list are missing one or the other. The quality of the Majority Leader’s pages, however, is lacking. Rep. Turzai’s Facebook number is also noticeably and inexplicably terrible.

Sen. Jay Costa, despite being the Democratic leader in the State Senate, doesn’t appear to have a Twitter account. That is a major reason why Sen. Costa’s grade is so low. While his Facebook account is decent, he has a relatively low number of followers.

Rep. Dermody is our unfortunate last place finisher. The top-ranking State House Democrat has a Twitter account with a decent number of followers, although it is not very active. Somehow, he has no Facebook account, which makes little sense in the year 2013.