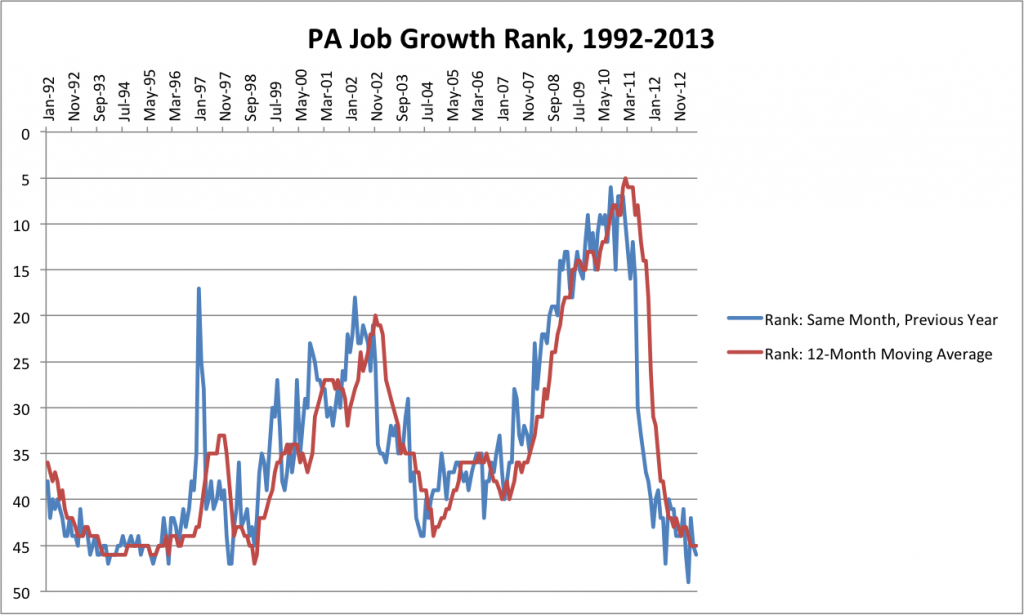 Jobs numbers are complicated. Both political parties will continue to cherry-pick from them to make their cases. There’s plenty of data to validate various arguments made by either side.

The latest debate is over the state’s job growth ranking. Pennsylvania was ranked 45th in the nation for June, 2013. It sounds awful at first blush – Pa. isn’t even in the top half! But the historic baseline shows that June’s ranking – while a noteworthy drop – is only about 10 places behind Pennsylvania’s average.

The graph above looks at how PA has performed versus other states in job growth over the past 20 years. On average, the state has ranked 34th out of 50.*

Why is this? Because Pa. is a bigger, older, northern state. Economists say all of those factors correlate with slower rates of growth even in the best of times.

That’s one of the reasons that the job growth rate ranking is not a very useful measure to determine the state’s economic health.

The ranking looks at the percentage increase in the workforce. So North Dakota secured the number one spot by adding 24,300 jobs in June (compared to the year before, June 2012). Pa. fell to 45th but added 27,900.

The state’s rank has as much to do with the national economy and 49 other states as with anything happening here. And that’s even before one asks what a governor or lawmakers can actually do to change the trend. (Short answer: nothing. Slightly less-short answer: nothing that will have any noticeable effect during their terms in office).

But since candidates on both sides of the aisle campaign on these kinds of rankings, we’ll all continue to hear about them.

Just for fun, here is how the Governors fared on this measure:

The numbers come from the U.S. Bureau of Labor Statistics, via the W.P. Carey School of Business at the University of Arizona. The data are not seasonally adjusted.

*Economists prefer the 12-month moving average of job data because it reduces the impact of outliers and random fluctuations. Rankings in this story will use the TMMA. In their attacks on Gov. Tom Corbett, Democrats have used the more simplistic ‘same month, previous year’ data set.