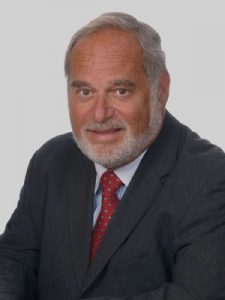 Marcel Groen announced he is resigning as chair of the Pennsylvania Democratic Party after being asked by Governor Tom Wolf after an interview with the Daily News.

“I have always believed that the Commonwealth’s Chief Executive should have final say on whom the Chairman of the Party should be.  The Governor’s staff informed me that he no longer wants me to serve as Chairman of the Party.  While I have done no wrong and disagree with the Governor’s assessment, I do not wish to be a distraction to a Party that has to rectify gerrymandered maps and elect strong and civically responsible candidates throughout Pennsylvania.  As such, I will honor his request and will immediately resign my position as Party Chair,” Groen wrote in an email to state party members.

Groen took over as chair after Jim Burn resigned. He was elected to the DNC’s Executive Committee last October.

Groen has faced recent criticism for the party’s silence on issues regarding sexual harassment, including allegations against Congressman Pat Meehan.

“If he was inappropriate, that’s for the people to decide — not for me,” Groen told the Daily News.

In the interview Groen said that the Governor was “already pissed off at me.”

“I accept full responsibility for comments attributed to me in an article printed several days ago in The Philadelphia Inquirer by Will Bunch.  Some of my comments were taken out of context and some were inaccurate. They were certainly in artful and in hindsight were not offered with the level of clarity I would have liked,” Groen said.

Below is the entire letter from Groen. 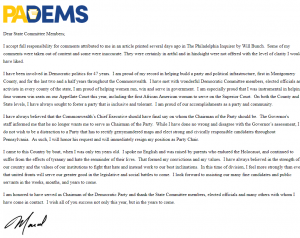