Conservative backlash against Sen. Pat Toomey and his effort to expand background checks for gun purchases is on the air. 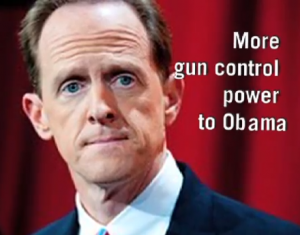 “Toomey is still trying to bail out Obama’s failed gun control agenda, and hand Obama and his law-abusing lieutenants even more information about law-abiding gun owners,” says a narrator.

It shows a photo of Toomey transforming into a photo of late Sen. Arlen Specter.

“Pat Toomey doesn’t sound like a conservative, or a Republican. He sounds like someone else,” the narrator says.

Specter narrowly beat Toomey in a 2004 GOP primary, and switched from Republican to Democrat in 2009. He passed away late last year.

The commercial represents a relatively light ad buy, constrained to cable. The ad itself appears to have been produced inexpensive and in-house. The group is only advertising in Pennsylvania at present.

Toomey has said he continues to support the measure, but has not actively pursue it since their effort failed in the Senate in April. At the time, Toomey’s conservative supporters loudly criticized his support for the measure but he earned wide plaudits from moderates and liberals.

Instead, she said, “It’s about his past agenda and what we hope we don’t see in the future.”