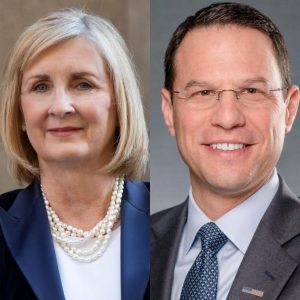 It was a response to Republican hopeful Heather Heidelbaugh, whose first ad included a thinly veiled jab at Shapiro for his rumored interest in running for governor in 2022,

First reported by Philly Clout, the 30 second spot begins fending off the charges made by Heidelbaugh’s ad, then moves on to touting his record in the office.

“Negative attack ads that distort the record of Josh Shapiro,” a voiceover says to begin the ad. “The ads are paid for by people backing the insurance company’s candidate: hack lawyer, Heather Heidelbaugh.”

It pivots to positive.

“But Attorney General Josh Shapiro has fought for us,” a narrator says. “Taking on opioid manufacturers that poisoned our communities, fighting big insurance companies to protect our healthcare, and holding Catholic Church officials accountable for covering up sexual abuse.”

Heidelbaugh’s campaign punched back by touting her decades long legal career and described Shapiro as a “career political with no real qualifications” for the statewide office.

“Josh Shapiro’s callous attempt to undermine the successful, 35 year legal career of Heather Heidelbaugh with false attacks does nothing but prove his fear of defeat this November,” said Heidelbaugh Campaign Manager, Ashleigh Pisarcik. “It didn’t take long for Mr. Shapiro to resort to name calling—a tactic not surprising from a career politician with no real qualifications to hold the office of Attorney General.”

The Shapiro campaign said that this current ad is airing in Pittsburgh, Philadelphia, Wilkes-Barre/Scranton, Harrisburg, Johnstown and Erie.

While this is just the first TV attack ads in the race, Heidelbaugh’s campaign delivered shots through digital ads over the past few months.

In May, the Heidelbaugh campaign released a 60 second digital ad criticizing Shapiro over his response to COVID-19 in the state. Heidelbaugh’s campaign also released a digital ad in July that attempted to link Shapiro to Philadelphia District Attorney Larry Krasner and included images of Philadelphia police officers killed in the line of duty. FOP Lodge 5 President John McNesby blasted the ad for the use of those images of the fallen officers. That ad is no longer on the Heidelbaugh campaign’s Youtube channel.

Philly Clout also reports that the Commonwealth Leaders Fund is on television jabbing at Shapiro in a 30 second spot.

Shapiro bested Republican John Rafferty by about 2.5 points for the open AG seat in 2016.