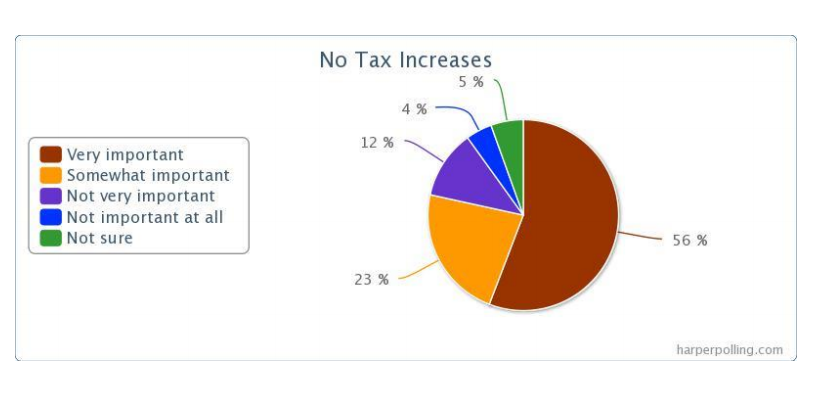 In the wake of Gov. Tom Corbett’s failure to get his plans for liquor, pension and transportation across the finish line, he has emphasized the fact that the budget was on time and contained no tax increases. The latest survey by Republican firm Harper Polling shows why.

“The survey finds that two of the state budget’s key attributes play very well with voters. If voters know nothing else about the new budget except that it was on time and contained no tax increases, they will give it high marks,” wrote pollster Brock McCleary.

The poll did not test voter opinions about Corbett’s 0-for-3 record on his top stated priorities.

A wide majority of likely voters surveyed said having the budget on time was very important (67%) or somewhat important (19%). 10% said it was not important.

A similar majority said it was very important (56%) or somewhat important (23%) that the budget contained no tax increases for the third year in a row. 9% said it was not important.

A plurality, 37% of respondents, said the budget’s increase in public education funding was not enough. 33% said it was good. The “not good enough” response was strongest in eastern Pa. (Philadelphia, SEPA, Lehigh Valley and NEPA).

A majority of respondents, 60% to 29%, said they support a plan to require new state employees to participate in a 401k retirement plan as opposed to the current pension system.

Harper surveyed 813 likely voters via interactive voice response from July 1-2. The margin of error is plus or minus 3.4%. 45% of respondents identified as Democrats and 42% as Republicans.

As with any survey conducted by a partisan pollster, the results should be taken with a grain of salt. The poll questions were phrased in such a way that maximize the semantic strength of Corbett’s case.

For example, part of the question about education funding included this sentence: “Some say the budget’s $120 million dollar increase in education spending, despite these tough economic times, is a good thing.” Had the pollster not supplied respondents the impressive-sounding funding increase number, answers might have come out differently.

In April Harper Polling conducted a survey for the UFCW 1776, the labor union most vocally opposed to Corbett’s effort to privatize the state’s liquor stores. The poll showed Corbett’s proposal with lagging popularity.