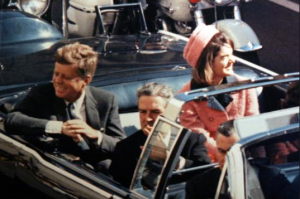 One section specifically polls the public’s views on “Life, Death, and the Intermediary.”

The first question asked respondents to choose which conspiracy theory they believed most likely to be true.

Over half (51%) of those polled agreed that Lee Harvey Oswald did not act alone in assassinating President John F. Kennedy.

The next group of 13% believed that the United States government knew that the 9/11 attacks were going to happen but did nothing to stop them. The theory that Princess Diana was intentionally killed followed close behind at 11%.

Out of those polled, 4% believed that Elvis could still be alive. Finally, tied at 3% were those that thought the CIA created AIDS and that the 1969 Apollo landing was faked, while 14% contended that they didn’t believe any of these theories to be true.

An overwhelming majority (75%) of Pennsylvanians contested that they “believe in life after death,” with 57% going even further to say that they definitely believe in it.

The next highest group, 18%, still remained open to the idea with an answer of “probably yes.”

When asked if they believe that there are other life forms in the universe besides those found on Earth, 69% of Pennsylvania respondents answered yes, with 38% saying definitely and 31% saying probably.

The non-believers were in the minority, with 12% answering “probably no,” 11% that were “not sure” and 8% that thought “definitely no.”

The final question that Pennsylvanians were polled on was if they believed in ghosts. The majority of respondents answered affirmatively at 60%, with 36% “definitely yes” and 24% “probably yes.”

Only a small group of 6% answered “not sure” to their views on the supernatural.

The sample size for this survey was 546 adults in Pennsylvania with a margin of error of +/-4.19%. The survey was conducted July 12-13, 2015 by Harper Polling and responses were gathered through landline interviews conducted using Interactive Voice Responses (IVR).