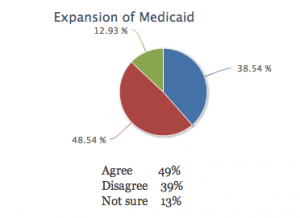 New numbers from GOP pollster Harper Polling show that Pa. voters favor the expansion of Medicaid for low income individuals, as prescribed by the Affordable Care Act, 49% to 39%.

Gov. Tom Corbett has said he would not expand the program, citing its growing cost over the long term. However, he has left the door open for a reversal on his decision.

67% of Republicans are opposed to expansion, while 80% of Democrats favor it. As do 51% of independents and third party voters. Self-described moderates support the expansion 70% to 20%.

The firm surveyed 622 likely voters on Feb. 27 and 28 via interactive voice response calls. The margin of error is plus or minus 3.39 percent. 47% of respondents were Democrats, 44% were Republicans.

Attorney General Kathleen Kane’s decision to block a proposal to privatize the management of the Pa. Lottery met with a mixed response: 39% of respondents supported the move, 39% opposed it.

One of the key messaging battles in the 2014 gubernatorial contest will be Gov. and former AG Corbett’s handling of the Jerry Sandusky child sex abuse prosecution.

Asked which of these statements came closer to their point of view: “the 2-year investigation of Sandusky did not proceed quickly enough and politics may have been the reason why,” or “it takes time to build a case that resulted in the conviction of Sandusky on 45 counts and put him in prison for life?” respondents split 38% each.

Nittany nation, comprising the region of State College and north central Pa., was among the most critical of the prosecution. 52% of respondents there said the prosecution was slowed by politics. 30% said it was understandably time consuming.

By a margin of 46% to 36%, voters said the economic benefits of Marcellus shale characterized their opinion of the gas development, versus its potential environmental risks.

Ridge dominated in his home base in northwest Pa. as well as north central and south central. Rendell took charge in SEPA. Casey won NEPA and southwestern Pa.

Ridge lead among Republicans 40% to 34% for Santorum. Rendell won 37% of Democrats versus 28% for Casey.

Harper is a partisan pollster, so their survey questions were designed to test the strengths of competing messaging. Hence the question about Kane’s decision to block the lottery deal was phrased thusly:

“Do you agree or disagree with the Attorney General’s decision to stop the privatization of the state lottery system which would have added $50 million in funding this year for programs benefiting Pennsylvania seniors?”

The word “privatization” has a strong charge, which competes with the information about funding for seniors.

“Given that her move negates $50 million for senior programs, that’s not a particularly alarming percentage of voters who disagree,” concludes pollster Brock McCleary. “In fact, only 41% of seniors reject Kane’s decision.”

The full results are here.