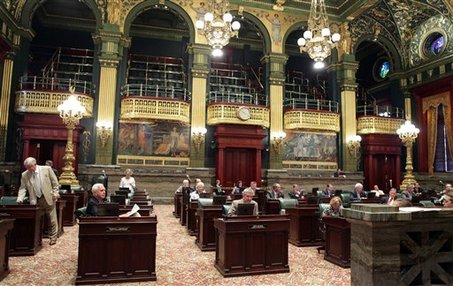 Lawmakers are great, but staffers are the people who make government happen. Here’s our second edition of the best and brightest in each of the four caucuses in Harrisburg: the top 10 Senate Democratic staff members.

If this isn’t the youngest caucus staff, it’s close. A number of legislative veterans left after the departure of Sens. Vince Fumo and Bob Mellow, either retiring or moving on to other work. Seven of the 20 Dem senators were elected within the past 2 cycles. Lots of new blood. The challenge for this group is, how to make a mark despite the party being perennially out of power. Here are the people who do it best.

He’s been the Dems’ steady hand at approps for years, finding ways to make the continual minority a bigger player in the budget process as well as other legislation. As respected by Republicans as he is by Dems, Albright is sharp, calm, has a good eye for budget analysis and is given a wide berth to negotiate for Sen. Costa. When you see a 40 to 10 Senate vote on something that was supposed to be controversial (like the most recent budget vote), you can bet he won something for the caucus in return.

When lawmakers get down to the brass tacks of negotiating the final status of legislation, she’s in the room. A quiet force, Brown brings continuity to a changing caucus. She’s worked for several minority leaders, including the recent transition to Costa, and is a point person in the caucus on a number of key issues. Her knowledge of legislation and her historical perspective are invaluable.

Give Bruder a little time and he can become an expert on practically any subject. Bright, detailed and candid as well as a quick study, Bruder has worked for Ferlo – who has a reputation as a demanding, involved boss – for a decade, all the way back to Pittsburgh City Council. He wants to hear what you have to say, and he represents the Senator well.

As the director of floor activities for the caucus, DeFrank has to be on her toes at all times. That means knowing the issues, the bills, who stands where, the location of members and more. She’s a long-time staffer who has risen through the ranks and now helps develop policy positions for the Senate Ds. She’s also the daughter of former state Rep. Tom Tigue and has the distinction of being one half of the only married couple to share one of our smartest staffers lists.

In the past few years, Senate Dems’ biggest victories have come with slots and table games legislation. Since the GOP didn’t have the votes, they got to sit in the driver’s seat. DeFrank, a former legislative liaison for the Gaming Control Board, was a major part of that win. He’s been working for the caucus for years – for Kasunic and Mellow, previously – and he’s well respected by staff and senators. He’s also known for his solid campaign work. He has the distinction of being one half of the only married couple to share one of our smartest staffers lists.

He is Sen. Hughes’ everything guy. Though the former lobbyist for Temple University is only in his early 30s, he understands policy and appropriations with a deftness that meets the demands of the most powerful Philadelphia Democrat in Harrisburg. He’s a key figure in the approps process for the caucus and balances the politics of Philly and Harrisburg – no easy task.

She knows the education code and policy better than anyone, and the bipartisan arrangement on her committee gives Flinn a degree of agency that few Dem staffers get. It comes in handy, because between Andy Dinniman, Tony Williams and Daylin Leach, Dems on the Ed committee aren’t exactly on the same page (think school choice). But she’s a professional and respected by all sides. Flinn actually started her career as a Republican, working for then-Sen. Tim Murphy and later the Ridge administration. She stayed on when Rendell took office and eventually became Director of Government Relations for the Department of Education.

Hafner is a veteran of the caucus and one of its smartest. Rarely are compromises hammered out or amendments written, reviewed and filed, without him playing a big role. When the senators need outside counsel, he does the hiring. Known as a serious worker, he also has a very dry sense of humor. He’s a good resource in a post-Bonusgate world, as well; he’s made it his business to thoroughly educate staff and senators on the do’s and don’ts.

This Johnstown native must have wondered what he’d gotten himself into when the HDCC assigned him to run Leach’s first PA House race in 2002. But after his boss won, he stayed on board. Now, as Leach rushes to the forefront of every bleeding heart liberal cause under the sun, Hoover manages the legislative logistics. He’s smart, hardworking, genial and the brains behind one of the most active offices – and lawmakers – in PA.

An up-and-comer and a fast riser, Mullins worked for Bob Mellow and Mike Stack before being tapped as Legislative Director to freshman Senator John Blake. He got his break when the Intergovernmental Operations Committee became more than just window dressing. He’s now charged with moving legislation that cuts costs and streamlines government – a tall order for one of the youngest people on any of our lists. His enthusiasm and determination make a strong impression.

A quick explanation of criteria. The smartest staffers are those whose savvy, institutional knowledge and work product make them indispensable to their caucus. Our list is based on submissions, interviews and conversations with lawmakers, lobbyists, reporters and other staffers. With apologies to talented district staff, this list contains those who do their work in Harrisburg.

Here’s our list of the Smartest Staffers in the Senate GOP.

Editor’s note: this project started back in November, but redistricting and the primary intervened. Thanks to all for patience.