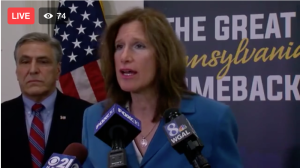 Melissa Hart has suspended her campaign and endorsed Lou Barletta for the Republican nomination for governor.

She is the second GOP candidate for the governor’s mansion to step aside in as many days, as Jake Corman suspended his campaign Thursday.

“We need someone to come out of the primary who is a proven leader, a uniter,” said Hart during a Friday morning press conference. “We need someone who can lead as a person, who has a vision and values that people can support. I’m suspending my campaign today and supporting Lou Barletta and on Tuesday, I will be casting my vote [for him].”

Barletta told the assembled audience to stay tuned whether there will be more candidates who bow out and lend their support to him. “We are so fortunate to have so many good candidates,” he said. “People that I’ve traveled around Pennsylvania are realizing that we need to come together. The people of Pennsylvania are more important than our desires. I’m proud to have Melissa and senator Corman come on as well.”

“If I’m going to endorse anyone, it is someone who has four daughters,” Hart said. “I’m doing it now because its important for Republicans who are leaders to see that we need to have someone who will carry the torch for us and be successful. 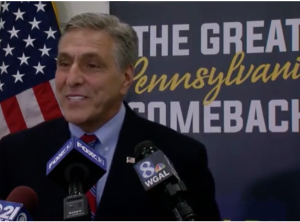 “If you really paid attention, there is not a lot of light between [all of] us and our policies,” Barletta said when asked about GOP front-runner Doug Mastriano. “What separates me from Mastriano, not being disrespectful, is that I’m making my case to the people why I can win. I have a history of beating Democrats. I’ve governed in an executive position. I say I can get support in a barroom and a boardroom.”

He concluded by stating that he would support Doug Mastriano if he were the Republican nominee. “I do not want Josh Shapiro to be our next governor.”

Barletta currently trails Mastriano by 10-12 points in the latest polls released by the Trafalgar Group and Fox News. He is three points behind in the PoliticsPA moving average of 11 polls since February.

14 thoughts on “Hart Steps Aside, Endorses Barletta for Governor”