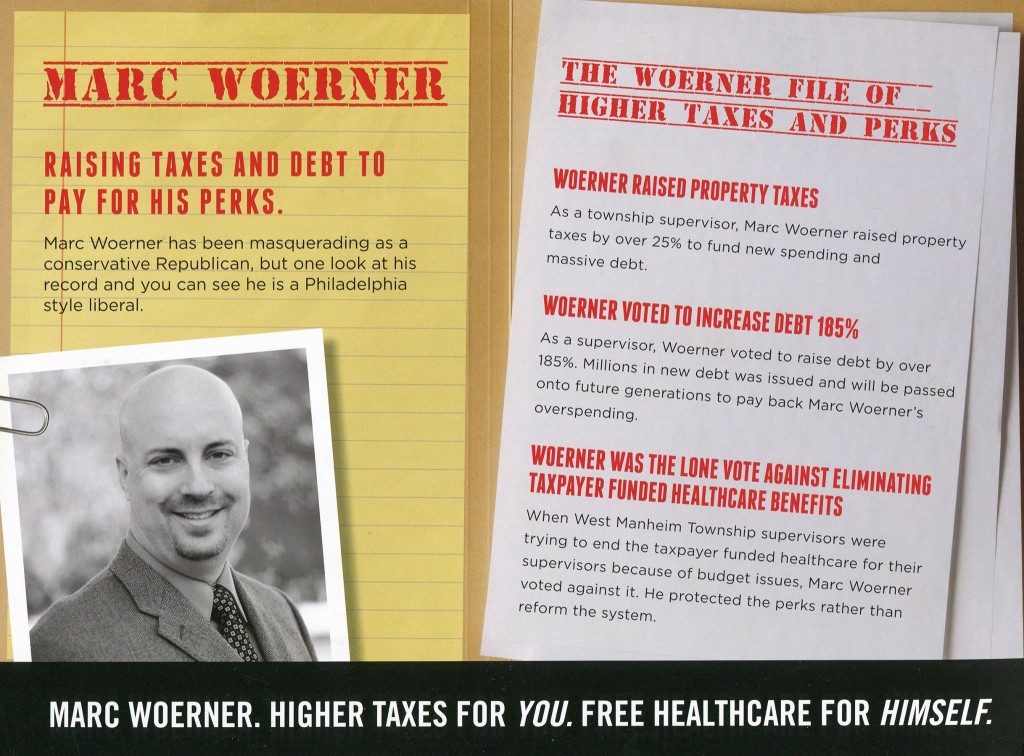 Mark Woerner, Republican candidate in the newly formed House District 169 race of York County, is the focus of a recent attack ad that called his conservative and limited government credentials into question.

“Mark Woerner doesn’t want you to know the facts about his real record of higher taxes, massive debt, and protecting his own perks,” the ad says. The ad was paid for by a group called PA Taxpayers for Integrity; however, this group is not registered with the Department of State and apparently doesn’t exist. The address used is a PO Box that isn’t even currently rented out.

“Mark Woerner has been masquerading as a conservative Republican, but one look at his record and you can see he is a Philadelphia style liberal,” the ad proclaims. It goes on to cite examples of Woerner raises property taxes, increasing public debt and voting against the elimination of “taxpayer funded health care benefits.”

The ad directly counters Woerner’s personal promise to “not accept a taxpayer-funded pension, a state-provided vehicle, per diem or any automatic pay raise,” and his self-proclaimed belief in “small, limited, Constitutional government.”

But Woerner also received the endorsement of the Citizens Alliance of Pennsylvania, a non-profit political action committee that espouses “limited government, economic freedom, and personal responsibility” – one of the most active conservative organizations in the state.

CAP has consistently reared its conservative head into York politics, of late. The group supported the campaign of write-in candidate Scott Wagner in the state Senate District 28 special election — an election that he won by a large margin.

Recently, CAP earned the anger of many higher-ups in the state Republican party for what they see as creating divisions in the party itself.

Wilson’s anger was spurred by PAC’s fundraising efforts in order to help the campaign of Ernie Merisotis, a Republican candidate in the HD-93 race.

Thus, CAP candidates tend to be both well-funded and very far to the right. And yet, PA Taxpayers for Integrity’s ad attacks the campaign of one of CAP’s endorsees because the group believes that Woerner’s conservative campaign is merely a misleading facade.