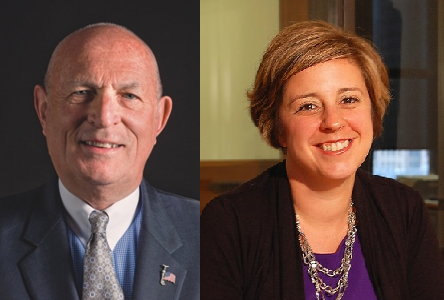 Incumbent Readshaw, who is challenged by fellow incumbent Molchany, a first-term Rep. whose district was moved to Lehigh County, retained most of his former voting bloc in the redistricting and came into the debate as the favorite to win the seat for an 11th consecutive time

The debate covered a multitude of subjects, including strengthening public education, building infrastructure, and attracting business to the South Hills area of Pittsburgh — the area that HD-36 encompasses.

But plenty of the conversation surrounded the campaign controversy of Readshaw’s vote against Corbett’s transportation bill and Malchony’s support for the bill.

When asked about possible tax increases, Readshaw stated: “I wasn’t for the last tax increase. That was the second largest tax increase in the Commonwealth’s history,” he said, regarding the transportation bill “gas tax.”

What really broached the issue was the question, “What is one campaign issue that you feel has been misrepresented?” Readshaw was quick to answer.

“That’s rather easy for me: I’ve been accused of being a Republican,” he said.

The crowd responded in laughter at his quick response; many were waiting for the issue to be discussed.

“I have the Allegheny County Democratic endorsement and I have been accused of being a Republican.

“Let’s face facts, folks: I stood up to the Governor. I said, ‘No, you shouldn’t tax people more than they are already being taxed.’ There is another way to solve the problem. We have a golden opportunity with Marcellus Shale. You raise the severance tax and we can cover most of the transportation costs,” he said.

“Ladies and gentleman, look at my voting record. I am not a Republican.” The crowd responded with a roar of applause.

But Molchany was quick to defend her support of the transportation bill.

“I’m starting to wonder if I voted for the same transportation bill that my opponent did. Because I am being misrepresented in that regard,” she said, tying it back to the original question posed.

“When you think about the transportation bill that passed, we actually took away the twelve cent tax that you pay at the pump.We took that tax away and we put it on the oil and gas companies. We uncapped the oil franchise tax.”

Molchany added: “Another thing that has been a misconception is that the revenue garnered from uncapping the oil franchise tax can only pay for roads and bridges and highways. It does not pay for mass transit. By law, it cannot pay for mass transit,” Molchany said, refering to Readshaw’s first televised ad that claimed he “fought Governor Corbett’s massive gas tax that funds Philadelphia’s mass transit.”

Readshaw quickly rebuttled. “My argument is how we pay for [the transportation bill]. There was another means to pay for it.”

Molchany fired back. Citing the Post-Gazette, she said, “What is being described as an alternative tax is not realistic. I, too, believe that it would be great to find additonal revenue streams to apply to fund these things. But it’s not going to work. We have a Governor who refuses to seek out additional revenue sources through Marcellus Shale.

“We are not going to find the revenues that are being described under the current Corbett administration.”

Aside from the salient transportation issue, the two candidates showed their support for legalizing medical marijuana, shrinking the size of the Pennsylvania legislature, and bringing an end to the Highmark and UPMC feud that has plagued the city of Pittsburgh.