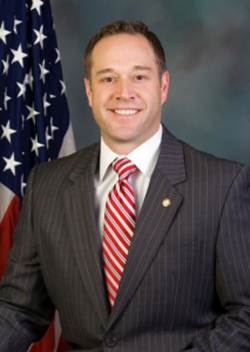 Facebook page. “Thank you so very much to all the volunteers, my friends and family. You have no idea how much your support has meant to me and how proud I am to still be your representative, only time will tell for how long.

Most of the votes presumably went to Huntingdon County Treasurer Richard Irvin, who had filed to challenge Fleck but was stricken from the ballot due to faulty petition filing.

But Fleck may not be out of the running yet. The county boards of election first need to certify the total of write-ins won by Irvin; it is possible voters wrote other names or misspelled Irvin’s.

Even if Irvin takes all of the write-ins, he might face Fleck again in the fall. There are 1,887 Democratic write-in votes to be counted. If Fleck takes a plurality of those (totalling at least 300), he will be on the ballot as a Democrat in the fall.

It’s the latest chapter in a fascinating story. Fleck made national headlines in December 2012 when he became the first openly gay, sitting Republican lawmaker in Pennsylvania history. At the time, he was one of just two in the nation.

It was a major liability in his deep red district, which comprises parts of Centre, Huntingdon and Mifflin counties.

In a lengthy Wednesday morning Facebook post, Fleck upbraided opponents who he said targeted him with homophobic attacks.

“I am gay. I don’t wear it on my sleeve, it doesn’t define who I am, and quite frankly it’s the least interesting part about me. Nevertheless, I knew that when I came out this race would be nothing more, nothing less than whether my constituency could wrap their mind around the fact that I was a gay man,” Fleck wrote. “I knew back then, as I do now that my political fate was out of my hands. I would continue to do what I have always done, and that was to represent my district to the best of my ability.”

But his sexual orientation wasn’t the only fodder for conservative critics. Even back in 2011, a year before Fleck came out, the conservative group Citizens Alliance for Pennsylvania was on TV in his district. Their ad slammed Fleck over his support for green energy programs and votes in favor of appropriations during Ed Rendell’s administration.