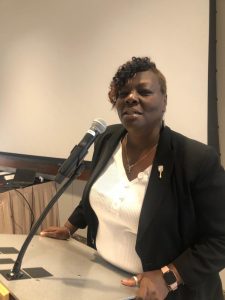 The Democrats have once again selected a candidate for a special election in this West Philadelphia state House district.

On December 27, Democratic ward leaders convened to select G. Roni Green, a business agent for SEIU Local 668 and Democratic Committeewoman for the 38th Ward, to be their nominee for the 190th House District special election.

The special election to fill the seat vacated by state Rep. Movita Johnson-Harrell (D-Philadelphia), who resigned in December after being charged with theft, perjury, tampering with public records along with other crimes, will be held on February 25. This will be the second special election for this seat in less than a year after Johnson-Harrell was selected as the Democratic candidate in January 2018 after state Rep. Vanessa Lowery Brown (D-Philadelphia) resigned “under protest” when she was sentenced on a bribery conviction.

According to the Philadelphia Inquirer’s Chris Brennan, Green, who was one of nine candidates seeking the Democratic Party nod, was considered one of the front-runners for the seat.

“I see us as moving forward to be a proud and prosperous district, and that I wanted to build a coalition with the ward leaders, the committee people, the business community, the youth, and clergy,” Green said, according to the Inquirer. “We know that everyone has a voice, and every voice should be heard at the table.”

G. Roni Green, an SEIU Local 668 business agent, is the Democratic nominee for the Feb. 25 special election in the 190th District of the PA House. pic.twitter.com/WSeDkk4QIz

Green has served as the Democratic Committeewoman for the 38th Ward, 9th Division for six years and has been a community and labor leader for decades.

As a business agent for SEIU Local 668, Green represents nearly 1,500 human service workers and along with SEIU 668 and the three other SEIU locals, represent over 1,800 members in the 190th District. Prior to serving in this role, Green was elected to be the union’s statewide Secretary Treasurer in 2011 and held this role until 2014.

It is currently unclear who she will face in the special election on February 25.

Johnson-Harrell represented the 190th District from March-December 2019, while Brown held the seat from 2009 until 2018.