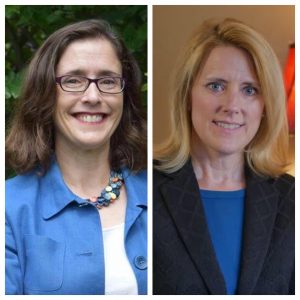 The GOP has its candidate for HD-30.

Lori Mizgorski, state Rep. Hal English’s (R-Hampton) Chief of Staff, closely defeated two other candidates to replace English as the Republican candidate on the ballot in November according to WESA.

The race is now set between Mizgorski and Democrat Betsy Monroe for HD-30.

English caught many people off guard with his surprise retirement announcement made in the beginning of the month. He won the seat in 2012, taking over for Randy Vulakovich, who was elected to the State Senate that year.

Mizgorski, English’s Chief of Staff and Shaler Commissioner, describes herself as the “qualified candidate” and has said she’s been on the “front lines listening to concerns, responding to needs and addressing the issues in our district.” She responded last night for comment after a day of campaigning.

“As a Shaler Commissioner and legislative staffer, I understand the needs of the district and I am excited to engage with constituents in a greater capacity,” Mizgorski said. “I will be bringing their priorities to Harrisburg. Some of those include passing a balanced budget and revenue plan simultaneously, maintaining roads and bridges and supporting school safety measures.”

Monroe, former supervisor at Highmark, won the Democratic nomination during a three-way primary in May collecting 39% of the vote.

She believes the nomination of Mizgorski was made, “solely by Republican insiders”.

“I think it’s telling that it’s been a dozen years, including two cycles with incumbents not seeking reelection, since voters have had the chance to choose their Republican nominee for PA House District 30,” Monroe said. “Every cycle the nomination goes either to the incumbent or someone handpicked by party leaders behind closed doors.  When did order of succession become part of the democratic process?”

English was unopposed for this seat in 2016.

The nomination means Allegheny County’s State House delegation will be slightly less lopsided next session (it is currently 22-to-1 male-to-female). The HD30 winner likely will join State Rep. Anita Kulik, who is favored to win re-election, as well as Sara Innamorato and Summer Lee, who are unopposed in the fall. The race to replace outgoing Rep. John Maher features Natalie Mihalek (R) and Sharon Guidi (D). The candidates for Rep. Mark Mustio’s seat are Valerie Gaydos (R) and Michele Knoll (D).

HD-30 has been reliably Republican, but the 2016 general election indicated a closing of the gap.

President Trump defeated Sec. Clinton 52-44 in 2016, which is a considerable difference than the 2012 Presidential Election. GOP Presidential nominee Gov. Romney bested President Obama 58-41 in this district.

*Election results are courtesy of DailyKos.