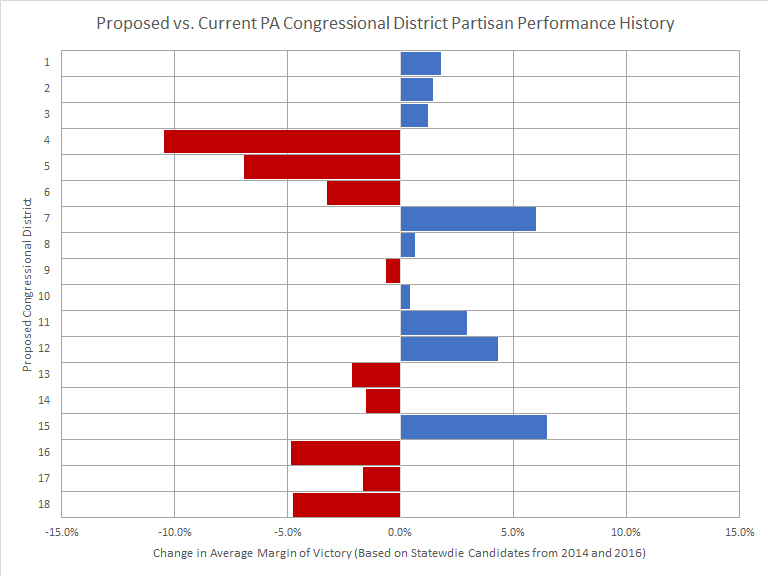 On Friday, Feb 9th, just hours before the court-imposed deadline, Senate Pro Tempore Joe Scarnati and House Speaker Mike Turzai submitted a new Pennsylvania congressional map to Governor Wolf.  While many legal and political questions remain, here is a deep dive into the districts they drew.

Senator Scarnati posted a PDF of that map on his website, which made it possible to take an initial look at the proposed districts, compared to the existing ones, relative to voter registration and past performance numbers.  The technical note at the end of this piece describes the process used to make these estimates and a few points regarding their precision.

Figure 1, above, shows how a generic Democrat or Republican may expect to perform in the proposed GOP map versus the current districts. It aggregates results for all statewide elections in 2014 and 2016 within each district, and averages them together.

Overall, nine of the proposed districts would have performed more Democratic on average and nine which would have performed more Republican.  Districts 1 and 2, which were already overwhelmingly Democratic, would be even more packed under the proposal.  The open seats in the 7th and 15th would become more competitive under these new lines. The the 6th and 16th districts would be protected for the GOP. The 18th was also made safer for Republicans under this map – and not just because it moves Democratic special election nominee Conor Lamb out of the district. The proposal shuffles Republicans from the 12th district,  which sees its GOP majority cut in half.

Figure 2a below shows the proposed map with added detail of municipal boundaries. Figure 2b is a detailed look at the southeastern portion of the state, focusing on districts 1, 2, 7, and 13.  Note that Montgomery County, the third most populous in the state, is still split between several Congressional Districts. 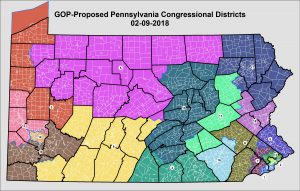 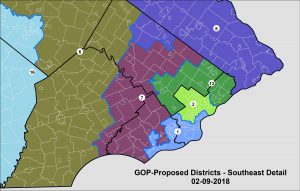 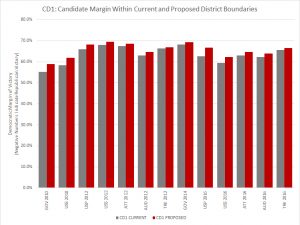 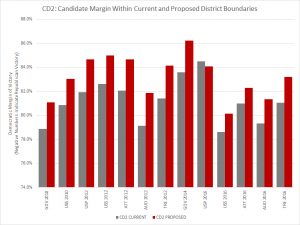 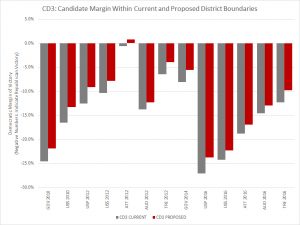 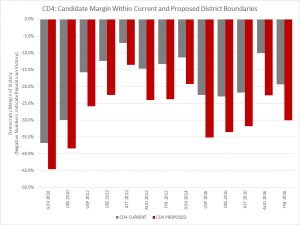 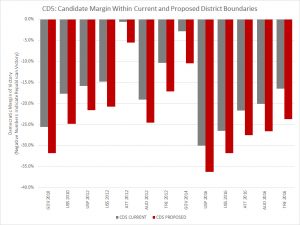 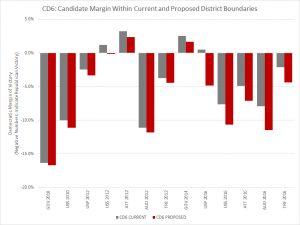 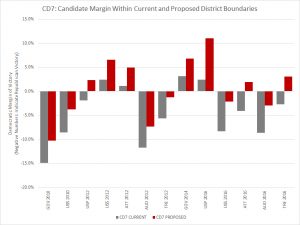 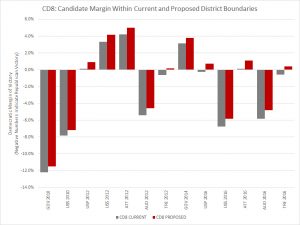 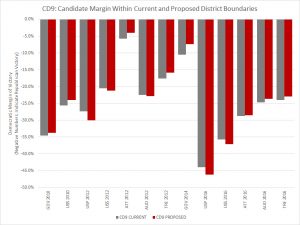 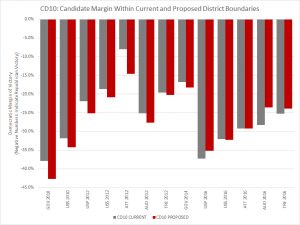 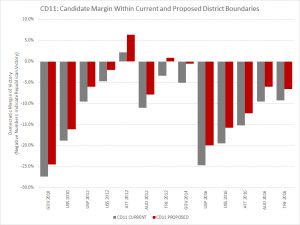 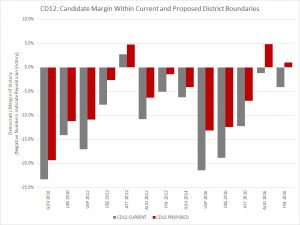 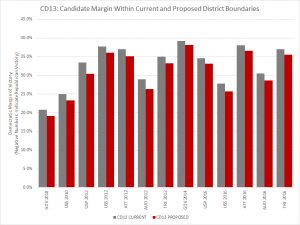 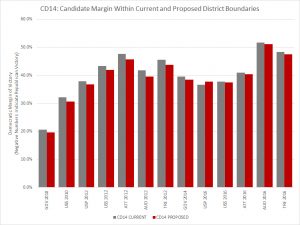 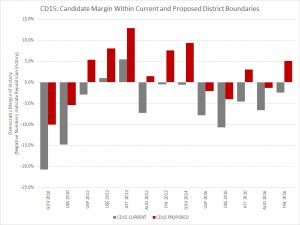 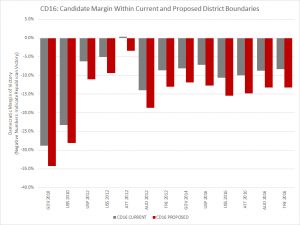 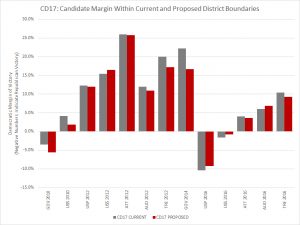 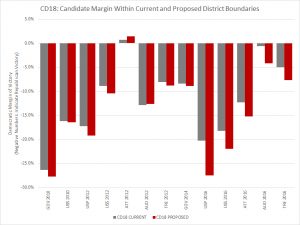 Finally, Figure 3 shows the voter registration statistics estimated under the GOP proposal, compared to the current map.  Districts are ordered from left to right on the chart based on decreasing Democratic registration advantage under the current Congressional District boundaries.  While the registration statistics can be interesting to look at, they should be examined cautiously given the sizable and fairly reliable gaps between registration and performance, particularly in the southwest and southeast.  For example, looking at just the registration statistics, one could assume that CD12 is a reliably Democratic Congressional District, and that CD7 is more reliably Republican than any district other than CD10. As you can see in the charts for each of the districts that follow, these registration numbers alone do not define the partisan performance of these districts. 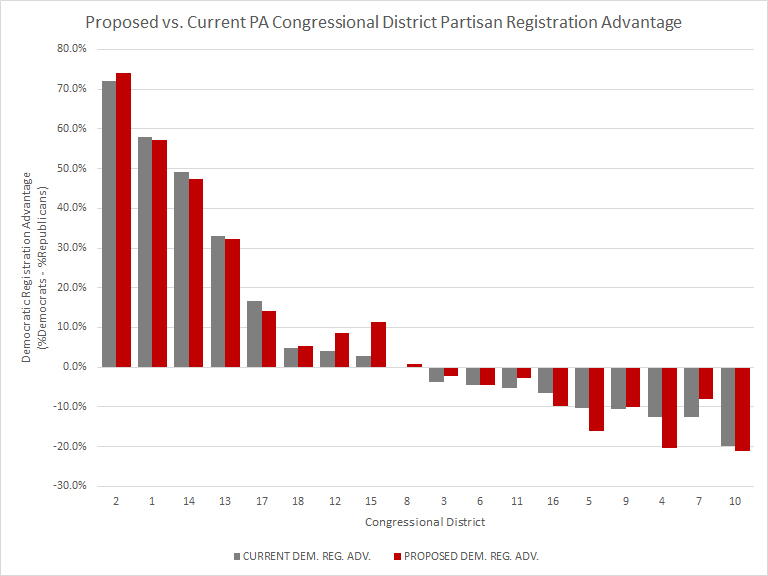 Matching municipalities to the proposed Congressional District boundaries: By opening the PDF map on Senator Scarnati’s website in Adobe Illustrator, I was able to remove the layers containing the labels and county lines, and reduce the map to just the precise outlines of the proposed congressional districts.  By exporting those lines to an AutoCAD DXF format, I could open them as vector art in ArcMap GIS mapping software, and use a georeferencing tool to line the proposed district boundaries up precisely on a municipal boundary shapefile.  This then allowed me to perform spatial joins to associate municipalities with the districts they fall within.  I already had a file with voter registration statistics (from November 2017) and past election performance (from 1992 through 2016) associated with these municipal level boundaries – and ward-level boundaries in Philadelphia and Pittsburgh.

Caveat on Municipal splits: There is a margin of error on these estimates in some of the districts, because I am assigning municipalities to the proposed districts based on where the municipalities’ center points fall.  Therefore, I am not accounting for municipalities which are split between congressional districts.  There are actually only a handful of split municipalities however (17 according to Senator Scarnati – I only see 13 that are obvious), and most of those municipalities are either small or are located almost entirely within the district they were assigned to in my analysis.  The most significant impact I can see from this shortcut would come from Upper Merion Twp, which is split almost evenly between the 7th and 13th districts, and which I included with CD7.  With roughly 18,500 registered voters, that’s not trivial, but I calculated that if I moved a representative half of Upper Merion voters to CD13, the registration margin would change by 0.33% in CD7 and by 0.46% in CD13.  Hillary Clinton’s would change by 0.28% and 0.14% respectively.  The other municipality split I see would not have nearly that large of an impact on the overall district performance estimates.