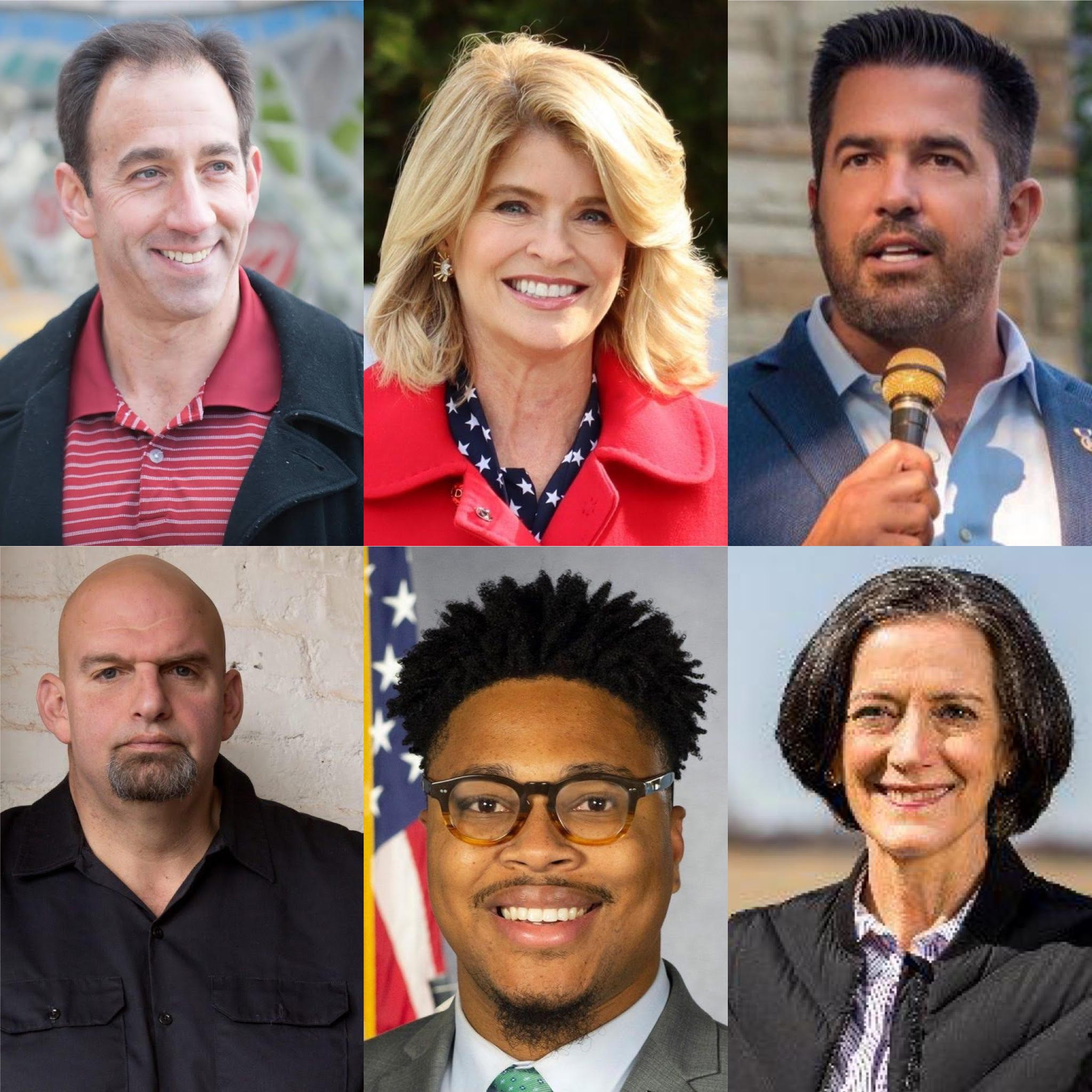 The 2022 race to succeed outgoing GOP Sen. Pat Toomey is well underway in the Keystone State and the latest wedge issue has emerged in the statewide showdown.

The latest issue that has taken center stage in the 2022 race is the $1 trillion infrastructure bill that passed the U.S. Senate on Tuesday by a 69-30 vote.

Although the New York Times described the vote as “uncommonly bipartisan,” Pennsylvania’s delegation remained split on the matter as Sen. Bob Casey voted in favor of the bill and described the legislation as “vital” for American communities, while Sen. Pat Toomey voted against the bill and said it is “‘too expensive, too expansive, and too unpaid for.”

Much like the state’s Senate delegation, the 2022 hopefuls for Toomey’s seat largely fell upon party lines on the latest vote.

Here are their responses to the $1 trillion infrastructure package.

“This bill is a big win for Pennsylvania. Thanks to the hard work of the Biden White House, Pennsylvania will get billions of dollars to rebuild our highways and bridges and will be able to put people across the commonwealth to work,” Fetterman wrote in a press release on Tuesday afternoon.

“It’s not surprising that Sen. Toomey once again has turned his back on the working people of Pennsylvania and has voted against this much needed bill. If I was in the Senate I would have proudly voted for this bill.

“Now we need Democrats in the Senate to continue to vote like actual Democrats and swiftly pass the historic reconciliation package that will finally rebuild our nation’s crumbling infrastructure and deliver major parts of President Biden’s agenda to the American people.”

“With today’s vote in the Senate, we are one step closer to creating good-paying, union jobs here in our Commonwealth and across the country to finally bring our infrastructure into the 21st century — from our roads and bridges to broadband and our energy grid. And the fact that Senator Toomey and the Republicans vying to replace him couldn’t get behind this broadly bipartisan package underscores how badly Pennsylvania is in need of another U.S. Senator who’ll always do what is right for our Commonwealth,” Arkoosh wrote in a press release on Tuesday afternoon.

“The U.S. House of Representatives must move without delay so this critical work can get underway and put our economy on the path to recovery. At the same time, I want to see investments in the people who make our country work, as they remain our greatest asset. That means raising wages, fighting for paid sick leave, and investing in our caregiving economy so home health aides, nurses, and child care workers are paid what they deserve and kept safe on the job.”

​​“Senator Pat Toomey had one final chance to stand up and make history for PA’s working families, and instead, he chose cowardice and a deeply broken status quo. In failing to meet the moment, Sen. Toomey passed up the opportunity to address some of the most pressing issues facing working families like mine,” Kenyatta wrote in a press release on Tuesday afternoon.

“Pennsylvania’s working families desperately need this infrastructure investment and the following reconciliation bill. Yet in this crucial inflection point, Sen. Toomey failed, and every single Republican seeking to replace him has said they would have done the same. Pat Toomey’s legacy will be as sad and undistinguished as his tenure.

“When I’m in the Senate no one will have to guess where I’ll be. I’ll be working shoulder to shoulder with President Biden to deliver for those who desperately need it.

“I endorsed President Biden on day one of his campaign and travelled around the country for him because I knew he understands what’s at stake for our families. The investments made in the infrastructure and budget packages are critical. PA’s working families deserve two Senators who understand that in their bones. I look forward to being that second Senator.”

“I am pleased and excited that the Senate was able to take this important step,” Street emailed in a statement to PoliticsPA. “It shows that by focusing on those things that benefit all people of all backgrounds, our President from Scranton was able to bring lawmakers together to improve the quality of life for regular people across the country.”

“While I unequivocally support the efforts to advocate for human infrastructure, I feel we should take this moment to celebrate this significant victory,” Street continued. “I believe the President when he says he can get the vote done. I am looking forward to supporting him in this effort and to what this bill will mean for Pennsylvania.”

Street (D-Philadelphia), who filed a statement of candidacy with the Federal Elections Commission for U.S. Senate in April, has an exploratory committee, but has not announced his entrance into the race.

Orts, a longtime professor at the University of Pennsylvania seeking the Democratic Party nomination who released his campaign’s Green Paper on the Climate Emergency and Jobs, believes the bill falls short on addressing the climate, but said he would have supported it.

“Yes, I would have voted for the bill, but I would also have worked with the Democratic majority in the House to make clear that its eventual adoption must be made contingent on a larger, more pro-climate reconciliation measure,” Orts emailed to PoliticsPA.

“The politicians in Washington appear unable to understand that the climate emergency is an urgent, inevitable, and non-negotiable crisis that threatens more than one million Pennsylvanian jobs right now,” Orts said. “It is not simply another issue in a long list of bargaining chips that Senators and Representatives in Congress should be trading around like school lunch snacks.”

“Although the bipartisan infrastructure bill makes welcome improvements on climate resiliency and nominal investments in cleaner transportation, at the end of the day it falls well short of the kind of bold rethinking and much larger investments that are required now to truly combat the climate emergency and create millions of new jobs.”

“The bipartisan infrastructure bill shows how common sense can win over ideological nonsense,” Snyder emailed to PoliticsPA. “It also underscores why we can’t let the PA Senate seat go someone who would be a new member of the de facto Senate Socialist Squad.”

“If I were a US Senator I would have voted to pass this infrastructure Bill, and I would have been part of the bipartisan group that spent so much time and energy putting it together and getting it to the finish line,” Costello emailed to PoliticsPA.

Costello, who has been mulling a run for U.S. Senate for months, has not made a final decision yet of whether to join the race or not.

PoliticsPA is seeking comment from Rep. Conor Lamb (D-Allegheny) about his thoughts on the infrastructure bill.

The Montgomery County real estate developer and former Lt. Governor candidate believes that roads and bridges need help, however, he disagreed with this bill as the best way to address the matter.

“This infrastructure bill is just the latest iteration of a Washington hellbent on spending not only our money, but the money our children and grandchildren haven’t even earned yet,” Bartos emailed to PoliticsPA. “Only 10% of this funding actually addresses physical infrastructure, while the rest is wasteful, political pork.”

“Having just driven 3,700 miles, visiting all 67 counties, I can tell you without a doubt that our roads are in need of help,” he continued. “The bill being put forward barely even tries to address that need.”

The combat veteran, author, and former congressional candidate took to Twitter to credit Toomey for his vote against the bill and also reiterated support for a “clean” infrastructure bill.

“Good vote by @SenToomey. Calling this an infrastructure bill is pretty disingenuous.

It’s like putting a piece of lettuce on your cheeseburger & calling it a salad,” Parnell tweeted on Tuesday.

Calling this an infrastructure bill is pretty disingenuous.
It’s like putting a piece of lettuce on your cheeseburger & calling it a salad. https://t.co/Jp8PdEwzK9

“I’m all in favor of a clean infrastructure bill. Roads, bridges, broadband, etc. But we should not mortgage the future of our children & our children’s children by recklessly spending trillions on Green New Deal BS & borrowing from China to do it,” Parnell tweeted on Monday afternoon.

I’m all in favor of a clean infrastructure bill.
Roads, bridges, broadband, etc.
But we should not mortgage the future of our children & our children’s children by recklessly spending trillions on Green New Deal BS & borrowing from China to do it. https://t.co/9uOVcLIHJe

“If I was the current United States Senator, I would have strongly opposed this “bipartisan” bill. It is nothing more than a progressive wishlist for the radical Left,” Barnette emailed to PoliticsPA.

“The taxpayers of Pennsylvania should not foot the cost for an “infrastructure” bill that lays the foundation for the Green New Deal and infects our institutions with critical race theory,” she continued. “Only 10% of this legislation goes towards real infrastructure, which our American industries are in desperate need of.”

“I expected Democrats to champion this radical bill, but the Senate Republicans who voted for this boondoggle legislation should be extremely ashamed of themselves,” Barnette emailed to PoliticsPA.

“Ambassador Sands stands opposed to the passage of the infrastructure bill in the US Senate. The proposed infrastructure agreement goes well beyond physical infrastructure and works to advance a radical left wishlist,” Joe Desilets, Campaign Manager said to PoliticsPA. “Democrats are praising this measure as a historic investment, but let’s call it what it is: one of the single largest expansions of national debt to date. It is unsustainable to continue this rate of unfettered and unfunded spending.”

The former U.S. Ambassador to Denmark during President Donald Trump’s administration also took to Twitter to thank Sen. Bill Hagerty for voting against the bill and said she would have opposed it, if she were in office.

“Thank you, @SenatorHagerty ! As the next U.S. Senator from Pennsylvania I will vote to protect our citizens from the socialist Green New Deal and to stop the hyperinflation. Let’s stop this administration in 2022! #PAFirst,” Sands wrote on Twitter.

Thank you, @SenatorHagerty ! As the next U.S. Senator from Pennsylvania I will vote to protect our citizens from the socialist Green New Deal and to stop the hyperinflation. Let’s stop this administration in 2022! #PAFirst https://t.co/EhufNloVN5

This story was updated with a comment from Carla Sands campaign.