Here’s What Trump Said About PA During His Pittsburgh Rally 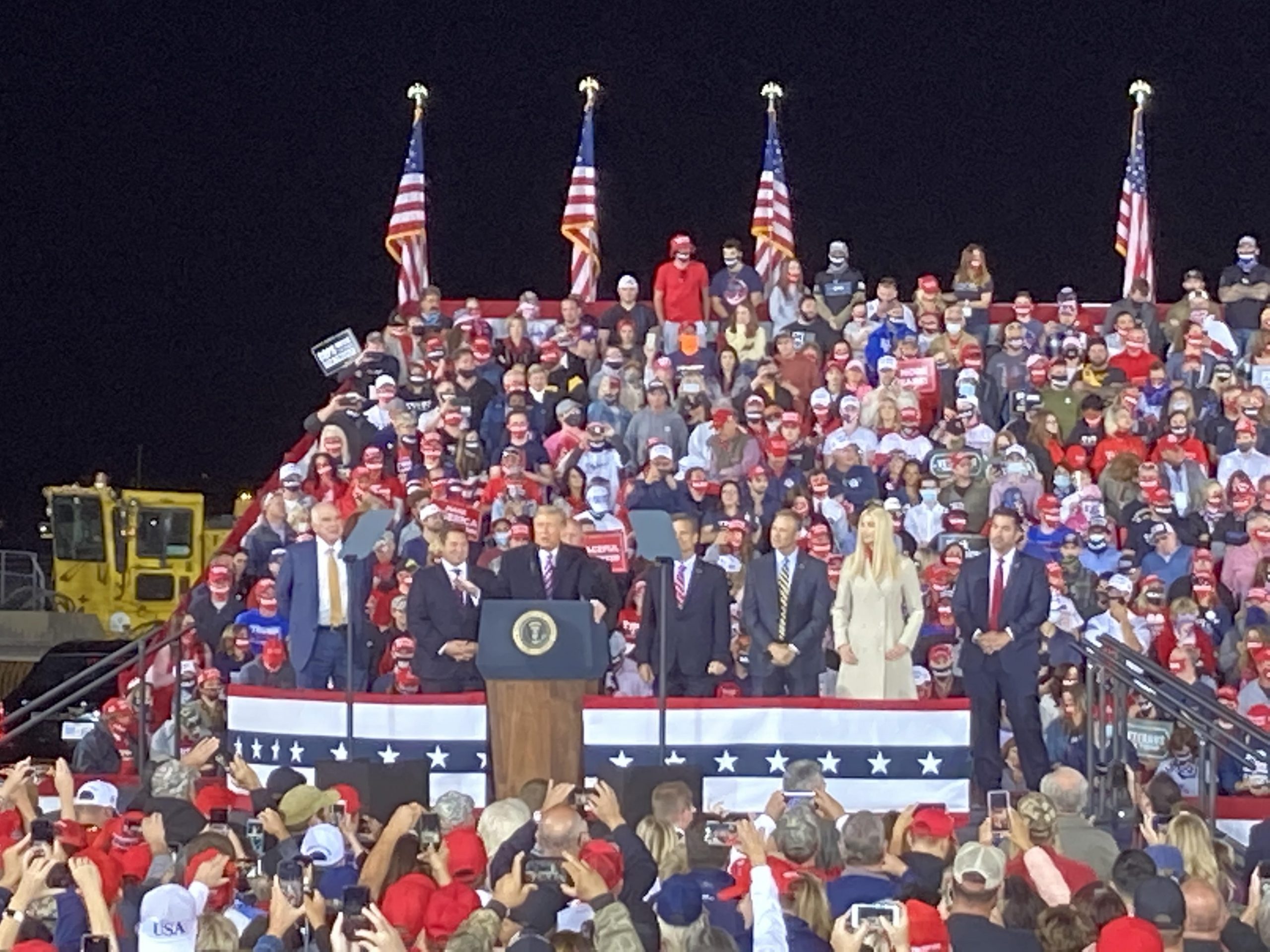 MOON TOWNSHIP, Pa.- President Donald Trump returned to Pennsylvania on Tuesday evening for the fourth time in September to rally thousands of supporters at the Pittsburgh International Airport. During his 90 minute address, he promoted his administration’s energy policies, expressed confidence in his campaign’s chances to keep Pennsylvania in the win column, and boosted Sean Parnell’s candidacy for the 17th Congressional District.

Here are the Pennsylvania politicians and topics he discussed during his rally at the Pittsburgh International Airport.

Trump touted his administration’s energy policies as the reason that the nation achieved “energy independence,” while adding that the industry is vital to the Pennsylvania economy.

“Pennsylvania is the home of American energy,” Trump said.

He pointed to the state’s economic numbers prior to the coronavirus pandemic as evidence that his policies are benefiting the commonwealth and said that the upcoming election will determine the future of the state’s economy.

“This election is a matter of economic survival for Pennsylvania,” Trump said.

In August 2019, Trump delivered an address from an ethane cracker plant being built in Beaver County that also promoted a similar economic message. During his speech on Thursday night, he recalled that visit to the state last year and referenced the facility being built as proof that his policies were creating jobs in the state.

“Last year I visited the Shell Petrochemical Plant in Beaver County,” Trump said. “The largest investment in your state’s history and that was all made possible by our pro-energy policies and we’ve done it a lot.”

Although Trump credited his policies for the plant being built in PA, the AP reports that Shell announced plans to build the complex in 2012 and the company proceeded to go forward with their plans in June 2016, prior to Trump’s election.

Trump likened the impact of the energy industry in Pennsylvania to Texas, while accusing Democrats of not wanting “oil, fracking, and energy.”

A central theme to Trump’s reelection campaign in western Pa is criticizing former Vice President Joe Biden on the issue of fracking. He criticized Biden over the matter and pledged that he is the candidate that is “all for fracking.”

Trump also slammed Biden for supporting NAFTA and other free trade agreements, which he said led to a decrease in manufacturing jobs in the state.

“Biden shouldn’t be asking for your vote,” Trump said. “He should be begging for forgiveness.”

“This is a candidate who is the real deal,” Trump said, talking about Parnell. “He’s tough as hell, he’s no lamb.”

Trump attempted to paint Lamb as a “puppet” for Speaker Nancy Pelosi and said he’s not the representative that he said he would be when he was running for the seat.

“This Conor Lamb turned out to be a stone cold phony,” Trump said.

Lamb fired back on Twitter after Trump’s comments about Parnell being “no lamb,” and criticized Trump’s response to COVID-19.

“We recently had 14.3% unemployment in Allegheny, +15% in Beaver. The families who are suffering know you’re blocking votes on money & health care for them, but rushing a judicial nominee for yourself,” Lamb wrote in a tweet. “Keep making jokes. We know this is serious.”

Trump first shouted out Parnell during a speech in Beaver County in August 2019, prior to Parnell entering the race. Shortly after formally announcing his interest in the seat, Trump delivered his “complete and total endorsement” in Dec. 2019 and has boosted his candidacy on numerous visits in the state.

Trump expressed optimism that Pennsylvania will back his bid in November once again.

He said that their campaign is attempting to be competitive in New York, but said they will carry the Keystone State.

Trump, who was the first GOP presidential candidate to win Pennsylvania since 1988, said that Republicans in the past were confident that they could win the state, but his message resonated with voters best here.

He also likened the sound of the crowd to a Penn State football game and as a gauge that he has momentum heading into November. He even shouted out a member of the crowd who was wearing a suit that looked like a brick wall, saying that he’s “going to get one of those jackets.”

Trump made a few comments during his rally that made a direct pitch to the voters of Pittsburgh that included railing against the Paris Climate Accord, referencing a recent incident that went viral with protesters and diners in the city, plus cheering on the Steelers and their quarterback.

“I withdrew from the catastrophe because I was elected to fight for Pittsburgh, not for Paris,” Trump said, talking about his decision to withdraw from the Paris Climate Accord.

Trump has delivered that specific line several times during his presidency, dating back to 2017 when he made the decision to withdraw from the agreement.

Trump also tweeted about the specific incident that went viral on social media a few days after it happened, while promoting his “law and order” message. KDKA reported on Sept. 8 that the Pittsburgh Police are working with the U.S. Attorney’s Office and FBI Pittsburgh to investigate the incident.

Trump also mentioned in the beginning of his rally that he was happy to be in Pittsburgh, “home of the Steelers.” He also shouted out QB Ben Roethlisberger.

Although Trump didn’t call out Gov. Tom Wolf by name, he criticized the governor for the restrictions in place due to the coronavirus pandemic to the mostly maskless crowd.

“Your governor hasn’t been so good,” Trump said, followed by boos from the crowd.

He then claimed that Wolf will remove pandemic restrictions after the election, a charge Trump’s made about several Democratic governors across the country.

These five members of the state’s congressional delegation plus Parnell joined Trump on stage after he shouted them out as being “great warriors” for his agenda. He specifically called Kelly as a “friend of mine” and added that he’s “popular.”

While promoting his “law and order” message, he also referenced rioting in Lancaster after police shot and killed a man armed with a knife a few weeks ago. He then criticized Biden for not promoting a similar message at the Democratic National Convention.

Biden condemned rioting during a speech in Pittsburgh in late August.

In his closing statement, Trump referenced several cities in the state as an example of what has made the nation great.

“From Erie to Easton, from Altoona to Scranton, from Harrisburg to right here in Pittsburgh,” Trump said. “We stand on the shoulders of Pennsylvania patriots, who gave their blood sweat and tears for their beloved country.”

He also mentioned the Declaration of Independence being signed in the state and the Battle of Gettysburg.

What They Said About Trump and PA

These statements from Republicans were made on stage prior to Trump’s address, while the statement from the PA Democratic Party sent out a press release leading up to the president’s visit in the state. 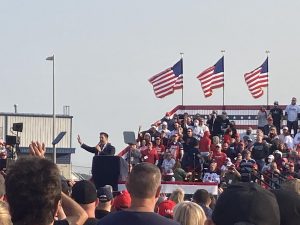 After leading a “Four More Years” chant when walking on the stage, Parnell detailed his background in the military and told the story about how Trump called on him to run for Congress – which he said was a surprise to him.

He emphasized the importance of the upcoming election as a battle of freedom vs socialism in the country, urging voters to back Trump.

“Ladies and gentleman, we are in a battle for the heart and soul of this country,” Parnell said. “It is freedom vs socialism.”

Parnell also delivered shots at Lamb during his 5 minute plus address, claiming that the incumbent Democrat is not the “independent, moderate” candidate that he promised he would be for PA17.

Parnell touted his A rating from the NRA compared to an F for Lamb. He also criticized Lamb for voting for impeachment.

The Trump 2020 Pennsylvania campaign chair blasted Biden as not being a good fit for Pennsylvania voters, while also boasting about the enthusiasm she is seeing across the state for Trump’s reelection bid.

“We know that Joe Biden is not right for Pennsylvania,” Comfort said. “Joe Biden might’ve been born in Pennsylvania, but he left a long time ago for the swamp in D.C.”

She said that the campaign is reaching voters in all 67 counties and hit over 1 million doors in the state.

Comfort also described the election as a “fight for the soul of the nation.”

“[Trump] promised he’d bring back manufacturing — but the manufacturing sector went into a recession in 2019 and there are almost 3,000 fewer manufacturing jobs in Pittsburgh today than there were at the end of the Obama-Biden administration,” Mills said in a statement. “He promised he’d get tough on China and bring back jobs to the U.S. — but he created a tax loophole that rewards companies for shipping jobs overseas.”

“I don’t expect much from the president’s rally tonight, except more lies and more broken promises…but I’m optimistic,” Mills continued. “I’m optimistic that in just over 40 days, we’ll elect a tested, proven leader in Joe Biden, who has a detailed plan to build our nation back better.”

Below is Trump’s full address.