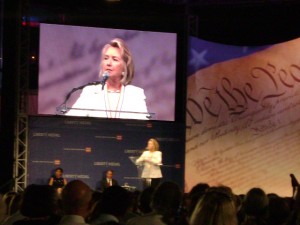 “The Liberty Medal was established in 1988 to commemorate the bicentennial of the U.S. Constitution,” according to the event program. “Given annually, the medal honors men and women of courage and conviction who strive to secure the blessings of liberty to people around the globe.”

The purpose of the ceremony was to celebrate the career of the former Secretary of State, with video and personal tributes from friends and colleagues from her life. The crowd and national press that gathered, however, were much more focused on what Clinton had to say about the two elephants in the room, our current conflict with Syria and her own presidential ambitions.

Former Secretary Clinton hewed closely to President Obama’s remarks on Syria, calling the Assad regime’s use of chemical weapons a violation of an universal norm. She also addressed the need to balance the nation’s defense with a restrained executive power. The heart of her contention, however, was that national security should be bipartisan.

“We must put the goal of national security ahead of partisan advantage,” she said. “When we let partisanship override citizenship, our standing in the world suffers.”

Foreign policy was also the focus of a small group of protesters assembled across the street on Independence Mall. Their complaints ran the gambit of accusations; moving from Benghazi to Syria to 9/11 conspiracy theories, the Council on Foreign Relations and the Illuminati. By the end, the two dozen or so protesters were screaming “Monica! Monica! Monica!”

While Secretary Clinton appeared to stay far away from the topic of the next presidential election, it came up during the remarks of three of her presenters.

First Jeb Bush, the Chairman of the National Constitution Center, joked about the presence of members of the national press.

“We’ve received a bit more media attention, I’m not sure what people expect to happen tonight,” Bush said. “Hillary and I both care about the people of America, especially those of Iowa, New Hampshire, and South Carolina.”

Other speakers, though, directly urged her to run. Both Mayor Nutter and President Gutmann expressed their desire that to Hillary’s long resume would soon be added the title “first female President.” The woman of the hour could only let out her distinctive laugh.

While Hillary never directly addressed the question, she did make a sly reference when thanking Jeb Bush at the beginning of her speech that may indicate her intentions.

“We both love this country and believe in the wisdom of the Founders and the Constitution,” she said. “They knew that in a democracy, citizens can not stay on the sidelines, they must get ‘in the arena’ as Teddy Roosevelt said.”

That line comes from a famous quote in a speech Teddy Roosevelt gave in 1910. Two years later, TR threw his hat back into the presidential ring. We’ll have to wait and see whether the woman in the arena will follow his lead.