Hillary Clinton: In The Arena 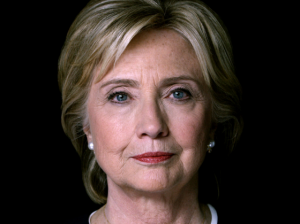 “It is not the critic who counts, not the man who points out how the strong man stumbled, or where the doer of deeds could have done better. The credit belongs to the man who is actually in the arena; whose face is marred by the dust and sweat and blood; who strives valiantly; who errs and comes short again and again, because there is no effort without error or shortcoming; who knows the great enthusiasms, the great devotions and spends himself in a worthy cause; who at the best, knows in the end the triumph of high achievement, and who, at worst, if he fails, at least fails while daring greatly; so that his place shall never be with those cold and timid souls who know neither victory or defeat.” – Theodore Roosevelt, Citizenship in a Republic

That was the passage Hillary Clinton cited three years ago in Philadelphia.

The former Secretary of State was accepting the Liberty Medal at the Constitution Center and the media was already trailing her as a candidate-in-waiting.

Jeb Bush, the man that was supposed to be her opponent this year, served as Chairman of the Center and joked about 2016. The past three years have been tough for Hillary but she can take some solace in the fact that they’ve been far tougher on Jeb.

“In a democracy, citizens can not stay on the sidelines, they must get ‘in the arena’ as Teddy Roosevelt said,” Clinton remarked that day.

For a long time, she herself was hesitant to fully get into the arena. As her husband explained Tuesday, she felt she wasn’t cut out to be a politician. Plus, there was the fact that women weren’t expected to get into the electoral realm when Hillary grew up.

So she and Bill tied their ambitions together and got far. They also made their own share of mistakes and received plenty of scars along the way. After the worst crisis of their lives, and towards the end of Bill’s presidency, she finally decided to take that leap and see if she could stand it in the arena.

It’s been incredibly difficult for her, as the self-fulfilling prophecy came true. Hillary Clinton is a talented office holder (save some self-inflicted wounds) but a terrible office seeker.

As a result, she managed to lose the Democratic nomination in 2008 to the more talented candidate. Even in 2016 she was considerably less exciting than her opponent, and had to battle it out with a man with much less institutional support.

Nonetheless, she has finally made it. Tonight she accepts the nomination of the Democratic Party for President, the first female in history to do so.

That 2008 opponent has became her strongest supporter and is happily passing her the baton. He even cited the same T.R. quote in his endorsement of her.

While the circumstances are different, however, Hillary hasn’t changed much. Hillary still despises the press. It’s not difficult to imagine who she believes are the “cold and timid souls” Teddy Roosevelt described. Still, she is sure that “it is not the critic who counts”.

The loudest critic, of course, is the man standing between her and the White House.

Despite all that, it’s her moment now. Tonight begins her journey to determine whether she will experience “the triumph of high achievement” or again err and come short.