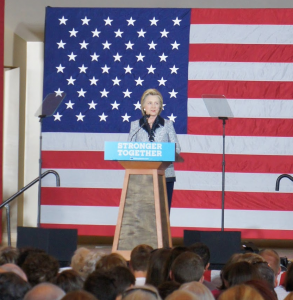 Hillary Clinton spoke to 400-500 supporters at the International Brotherhood of Electrical Workers Local Number 5 building today. A little over 100 supporters stayed outside in an overflow area to listen to the speech. Among those in the audience was Allegheny County Executive Rich Fitzgerald and Braddock Mayor (and Sanders supporter) John Fetterman.

This event had a much different feel to it than most of Clinton’s other rallies. There was no music playing at the beginning and the speakers mostly focused on the tragic shooting in Orlando.

Reverend James Edward Brown spoke, offering a prayer to those affected by the shooting and then to everyone in general.

Natalia Rudiak, a Pittsburgh City Councilwoman spoke next. She argued that America needs someone to, “Lead with: love not fear, compassion not hate, strength not reactionless, and someone to bring us together, not drive us apart.”

Montgomery County Commissioner and Democratic nominee for Attorney General Josh Shapiro took the podium next. He drew large applause when he thanked the police and first responders for their work.

He also called for, “common sense gun safety legislation” and promised that as Attorney General, no one who failed a carry test for a firearm would be able to get one.

Shapiro also gave a sharp rebuke to Donald Trump by saying we do not need, “Diplomacy by Twitter.”

Leo Gerard, President of the United Steelworkers introduced Clinton. In his remarks, he said that the labor community and all communities stand with Orlando and will have their backs.

He also called people trying to use terror to promote their goals, “Cowards.” 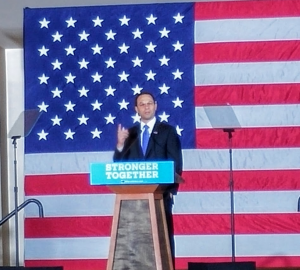 Gerard then praised Hillary Clinton as someone, “who will stand up to the gun lobby.” He said that as a Senator, Clinton never said no when it came to helping someone out.

Clinton then took the stage. She thanked the previous speakers and the IBEW for hosting the event. She then remarked it was great to be in Pittsburgh right after the Penguins won the Stanley Cup which drew big applause.

Then, Clinton shifted by saying she had hoped to talk about the economy but, “there are different things on my mind and probably on yours too.”

Clinton condemned the “hate crime” in Orlando. She then slammed Donald Trump for his remarks about the shooting. She said that Trump is only focused on “name calling” and demonizing Islam.

She called Trump’s plan to ban Muslims from entering the country “un-American” and “dangerous”. Clinton declared that most of Trump’s speech was lies. She noted that the shooter was born in Queens, New York “just like Donald” instead of Afghanistan as Trump claimed. Also she pointed out that since he was an American citizen, a ban on immigration would have failed to stop him.

Additionally Clinton called for tighter gun laws saying, “People can’t board planes with full bottles of shampoo, but people being watched by the FBI for suspected terrorists links can buy a gun with no questions asked. That is absurd.”

Clinton said that now is the time for “seriousness and resolve” and promised more proposals and ideas on terrorism in the weeks to come. She said this was a time to come together saying, “We’ve always been a country of we, not me.”

She closed her speech by talking about a letter that, “moved me to tears.” It was a letter that that had gone viral just recently. The letter was one that Bill Clinton found on his desk from George H.W. Bush on Inauguration Day 1993. Clinton had just become President and Bush Sr. had written, “Your success is now our country’s success. I am rooting hard for you. Good Luck, George.”

After the rally, Clinton headed to a fundraiser that is being held by the Tomlin family. Eventually, Clinton will head to Washington D.C. for the last primary and a meeting with Bernie Sanders.