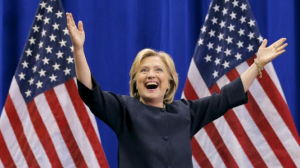 The Hillary Clinton campaign announced today she’s won the support of all 13 DNC members from Pennsylvania.

“We’re honored to have the support from these party leaders who know that Hillary Clinton is the only candidate who can stop Republicans from ripping away all of the progress we’ve made,” said Marlon Marshall, Hillary for America Director of State Campaigns and Political Engagement. “These DNC members will only strengthen our grassroots-driven campaign and help us engage even more voters across Pennsylvania in order to win the April 26th Primary.”

These endorsements are particularly valuable for Clinton because of each of them is a superdelegate. As we recounted earlier this month, the DNC members make up 13 of PA’s 21 superdelegates. The other eight delegate spots were allocated by whether the state has a Democratic Governor or Senators as well as the number of Democratic Congressmen. Gov. Rendell also has a vote as a former party chair.

We know Rendell is a long-time Clinton ally and FiveThirtyEight’s endorsement tracker shows Gov. Wolf, Sen. Casey, and Rep. Cartwright are also in the Clinton camp.

Therefore, we can conclude that Clinton has already secured at least 17 of the Keystone State’s 21 superdelegates.