Hillary Seeks to Sew Up Coalition in Philly Visit 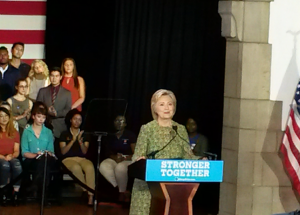 The first was to shore up her support in Pennsylvania, a state in which she is leading but which remains fundamental to her hopes of winning.

The second was an appeal to millennials, the part of the Obama Coalition that has been most resistant to her candidacy.

Speaking to a few hundred students in the Great Court at Mitten Hall, a large yet cramped space, Clinton offered up her usual stump speech with some extra bits specifically for this crowd.

“Your generation is the most inclusive, progressive and entrepreneurial that we’ve ever seen,” she stated at the start. “You want something to vote for, not just against.”

Early on she dropped the name of Bernie Sanders, the 74 year old Democratic Socialist who nonetheless won the hearts of campus liberals during the primaries.

“I worked with Bernie Sanders on a plan,” she explained. “We came up with a plan that makes public college tuition-free for working families and debt-free for everyone. And if you already have debt, we will help you refinance it and pay it back as a percentage of your income so you’re never on the hook for more than you can afford. You can actually see how much you and your family can save under our plan by looking at the College Calculator at hillaryclinton.com.”

She even added a new line to address young people’s concerns about her.

“I also know that even if you’re totally opposed to Donald Trump, you may still have some questions about me,” Clinton conceded. “I get that. And I want to do my best to answer those questions.”

In order to give voters a better understanding of her, Clinton described three women who changed her life: Dorothy Rodham, her mother; Marian Wright Edelman; her first boss; and Sophia, a student who encouraged her to run for the Senate in 1999.

Clinton’s attempt to describe herself by talking about her experiences with others, was only half-successful as the crowd was supportive but far from ecstatic. In fact, by admitting she’s not the greatest public speaker she created a bit of a self-fulfilling prophecy.

Towards the conclusion, though, she was able to bring the audience to its feet twice.

“We have to stand up to this hate,” she declared when denouncing Trump’s birtherism. “We cannot let it go on.”

A few minutes later, the Democratic candidate urged those who believed in the same principles her campaign does to “join us.”

“If you believe we should finally guarantee equal pay for women, join us,” she urged to a standing ovation.

So while some may criticize Hillary Clinton for focusing too much on the historic nature of her candidacy and the negativity of Donald Trump, it’s doubtful she’ll change it.
After all, it appears to be what the people want.