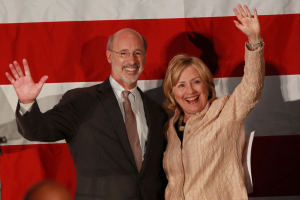 In fact, judging by a new internal memo, her campaign is counting on it.

According to Jonathan Martin of Vox, Clinton Campaign Manager Robbie Mook wrote up a six-page memo to the campaign’s top supporters to calm fears that they’re struggling.

While the whole document is an intriguing read, it includes a paragraph on the team’s electoral strategy:

“In an electoral map that already skews towards Democrats, the Republicans out-of-touch agenda puts those 270 Electoral College votes even further out of reach. Assuming the Democrats continue to win Pennsylvania, Wisconsin and Michigan (all of which they’ve won in every election since 1992), Democrats will need 23 out of the 85 electoral votes in remaining swing states Nevada, New Hampshire, Iowa, Colorado, Virginia, Ohio, and Florida.”

The three rust belt states of Pennsylvania, Michigan and Wisconsin are apparently viewed by the Hillary camp as their “blue wall”, which would ensure them at least 247 electoral votes.

Pennsylvania and Michigan have gone to the Democrats in six straight contests going back to Hillary’s husband, Bill Clinton, and his first victory in 1992. Wisconsin goes back even further to 1988 and Michael Dukakis.

It’s worth comparing the Clinton campaign’s map to the latest ratings from the Cook Political Report.

The two seem to agree that Michigan is likely to stay blue but Cook moved Pennsylvania and Wisconsin from “Lean Democratic” to “Toss-Up”.

Either way, with its twenty electoral votes (and the fact that Philadelphia will be the home of the Democratic convention) Pennsylvania is a must-win state for Hillary Clinton in 2016.