Can you blame him? Rep. Tim Holden today called on his opponent Matt Cartwright – and the numerous outside groups seeking to boost him – to end negative campaign ads. 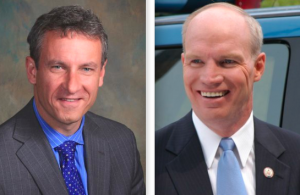 “In this campaign, both sides have gone too far. Between Matt Cartwright and outside organizations, over $1 million has been spent on negative ads against me on TV, in the mail, and on the Internet,” Holden said.

He’s faced half-a-million dollars in attacks from outside groups in the past month. The Campaign for Primary Accountability has run two ads against Holden (here and here); the League of Conservation Voters ran its own negative ad; and the Blue America PAC has put up anti-Holden billboards.

The 9-term Congressman has thrown his fair share of punches, too. Before today, he’d aired an introductory ad, then a spot blasting Cartwright for contributing to the ‘Kids for Cash’ judges and another which emphasized his opponent’s wealth.

“I take responsibility for my campaign’s part in that, and yesterday, ordered that only positive ads will be aired detailing my record on Social Security and the need to protect it from Republican efforts to dismantle it. I urge Matt Cartwright to join me in running a positive campaign for the final five days of this campaign.”

Holden also defended himself against one of their favorite criticisms – that Holden voted for the “Halliburton loophole” in the Clean Drinking Water Act – by noting that then-Senator Barack Obama voted the same way.

In conjunction with today’s message, his campaign pulled a spot that criticized Cartwright, an attorney from Lackawanna County, from contributing to judges who he’d argued cases in front of (not an uncommon circumstance in the legal profession). That ad is below. In its place they began airing the ad above, touting Holden’s advocacy for seniors.

Cartwright agreed to the ceasefire.

“Since day one I have run a positive, issues based campaign,” he said. “As of 10:30 am this morning we have asked all the stations to run our closing ad, ‘It’s Time,’ for the remaining five days of this campaign. I have also called other parties and requested they take their ads down and I call on Mr. Holden to ask the blue-dog group Center Forward to remove their ads accusing me of falsehoods.” [Details on that below]

Cartwright has had the luxury of running a positive race; outside groups have been beating Holden up for him.

On TV, Cartwright has stuck to introducing himself, and a few other Democratic campaign themes. He also aired a spot defending himself against Holden’s ‘Kids for Cash’ charge.

This morning, his campaign held an event to rebut the latest negative Holden ad about lawyers giving to judges. The press conference featured Michele Kachurak, a particularly sympathetic client of Cartwright’s who he represented in front of a judge whose campaign he had supported.

“Yesterday’s attack against me was a new low even for him, and he only pulled his ad because of public outrage.  If Tim Holden really wants to show that he has turned over a new leaf, he needs to publicly apologize to Michelle Kachurak,” Cartwright said.

Holden’s request might fall on deaf Super PAC ears. Asked if he would respect a ceasefire, Curtis Ellis, a spokesman for the Campaign for Primary Accountability, said his group would continue its “equalizer role” against the power of incumbency.

“We will continue our work to give voters the tools they need to hold their representatives to their promises,” he said.

Meanwhile, Holden will have to tell his own supporters to back off the negative ads. Politico reports:

Center Forward, a Washington, D.C.-based organization headed up by former Blue Dog and Alabama Rep. Bud Cramer, is airing a TV ad hitting Holden’s opponent, attorney Matt Cartwright, from the right and casting him as far too liberal to serve in Congress.

“Washington’s gridlocked — and Matt Cartwright would make things worse,” the spot says.“Instead of finding common ground, Cartwright says, ‘the answer is to raise the noise level. Don’t agree with him? Cartwright says, ‘You don’t compromise with people like that.’”