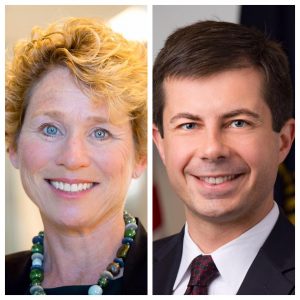 South Bend Mayor Pete Buttigieg is set to have a fundraiser in Philadelphia and a freshman Democrat serving in the Philly suburbs is listed as one of the co-hosts.

First reported by Politico, Rep. Chrissy Houlahan (D-Chester) is one of the co-hosts for the Oct. 20 fundraiser for the 2020 Democratic presidential hopeful in Philadelphia.

Houlahan has not endorsed Buttigieg or any other presidential candidate, but Politico writes that her participation in the fundraiser is a “rare sign of interest for Buttigieg among members of Congress.”

Note on this invite for a Pete Buttigieg fundraiser later this month: Rep. CHRISSY HOULAHAN. pic.twitter.com/VjL1djY0qg

“Chrissy is looking forward to hearing from Mayor Pete about his vision for our country,” a spokesperson from Houlahan’s campaign said to PoliticsPA.

This is not the first fundraiser for a 2020 Democratic presidential candidate that Houlahan has lent her name to. A spokesperson from Houlahan’s campaign that she’s accepted invitations to serve as a co-host for fundraisers for former Vice President Joe Biden and Sen. Kirsten Gillibrand (D-NY). The spokesperson continued to say that Houlahan, as a member of the Democratic co-host committee in PA, has offered to lend her name and co-host fundraisers for a number of candidates as they make their case to Pennsylvanians and added that she is not participating in raising money for these candidates as the co-host title is an “honorary title.”

Houlahan is “excited about a number of candidates” according to the spokesperson and does not currently have a particular timetable of when she plans to endorse a candidate, while Sen. Bob Casey and Reps. Brendan Boyle (D-Philadelphia), Matt Cartwright (D-Lackawanna), and Dwight Evans (D-Philadelphia) have already formally endorsed Biden’s bid. Buttigieg’s largest endorsement coming from a Pennsylvania Democrat is former Congressman Patrick Murphy (D-Bucks).

Houlahan represents the lone county in the state that flipped from Gov. Mitt Romney in 2012 to Sec. Hillary Clinton in 2016.