How Important Is a Candidate’s Position on the Ballot? 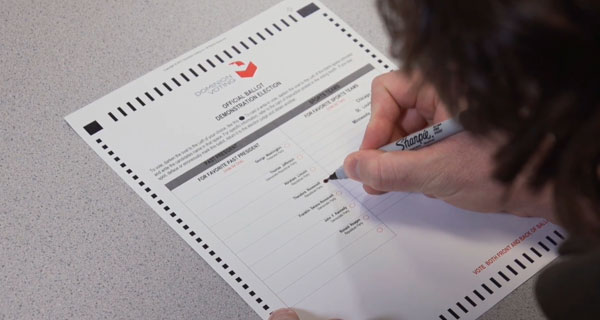 Wednesday is the “casting of lots,” the day when candidates for office find out how they will be listed on the primary ballot.

Candidates have already submitted how they want their name to be listed – Steve versus Stephen, for example. But who is listed first – Smith or Jones?

In the Pennsylvania general election, the party in control of the governor’s mansion gets their candidate listed first. So the Democratic candidate will be listed before the Republican candidate with other party nominees to follow.

Since Pennsylvania has a closed primary, both major parties have their own ballot. It is the charge of the Secretary of the Commonwealth – Leigh M. Chapman – to establish the order in which the names of the candidates are to appear on the ballot.

According to Department of State press secretary Grace Griffaton, “It is the Secretary of the Commonwealth’s prescribed manner, and the Department’s long-standing practice, to allow candidates to cast lots—i.e., pick numbers out of a bag—in the order in which they file their nomination petitions. All candidates may appear in person for the ballot lottery; however, their presence is not required.” The 2022 General Primary Ballot Position Lottery will be held at 10 a.m. on Wednesday in the Keystone Building Atrium.

In local elections, counties vary how they randomly select positions. In Armstrong County, numbered ping pong balls between 1-29 are drawn. In York County, numbered tags between 1-1,000 are drawn from an UTZ potato chip can. And in Philly, balls are chosen from the Horn and Hardart coffee can, which has its own parody twitter feed.

When all is said and done and the numbers have been drawn, is there an advantage to being listed first?

Yes, say Jonathan G. Koppell and Jennifer A. Steen. In 2004, the Yale and Boston College scholars studied 79 New York City Democratic primary contests and found that in 71 of them, candidates received a greater proportion of votes when they were listed first compared to any other position they were listed in.

In the three statewide races with four or more candidates (i.e. governor, lieutenant governor, U.S. Senator), the top name received more than 25 percent of the vote, providing an advantage of between 1.6 and 2.3%.

In races for local office, such as Congressman and state legislature, the effect is even larger, although in some cases not statistically significant. In 67 of the 75 contested primaries, the first position received more than its expected percentage of the vote with the median advantage at 3.6 percent.

Delbert A. Taebel of the University of Texas at Arlington stated in a 1975 study that candidates listed first enjoy an advantage, but not so much when voters had high recognition of candidate names, such as could be the case in the Pennsylvania U.S. Senate campaigns. However, low name recognition meant that voters were less likely to make any choice at all for those unknown candidates.

This is important because the party affiliation – one of the usual triggers to help a voter make her/his decision – is absent. Without more intimate knowledge of the candidates, a voter may choose another cue, such as which name is first, or may choose to not cast a vote for the race at all.

In 2014, Darren Grant of Sam Houston State (Texas) University analyzed the results of the Texas state primary and found that in lower-profile races, the difference between last and first on the ballot was 10 percentage points. He also studied a primary race for the state Supreme Court between two candidates with the last name, Green. In that particular race, the difference was just shy of 20 points.

There are 743 candidates that have submitted nomination petitions to become a member of the state committee – 307 Democrats and 436 Republicans. For most voters, name recognition will be an issue. For example, in Lancaster County, there are seven candidates for the Democratic State Committee and 17 on the GOP side.

Therefore, the luck of the draw could mean everything.