How the GOP Lost the Supreme Court 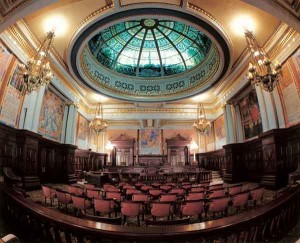 The biggest revelation on Election Night 2015 was the fact that the Democratic Party had won all five contested judicial seats.

This sweep altered the balance the power in the State Supreme Court, giving the Dems a majority.

The results were quite surprising. After all, it has been established that in non-presidential election years, Republicans hold the advantage.

So why then did the GOP lose their majority in the state’s highest court? There are many answers but they all boil down to the fact that the Democrats outworked their counterparts.

It started with the selection of the candidates. With three open seats it was important to find a well-balanced trio that could run strongly together.

Christine Donohue was a Superior Court Judge with a long legal record in Pittsburgh but the ticket was carried by two well-known names in PA politics: Wecht and Dougherty. David Wecht is the son of the famous forensic pathologist Dr. Cyril Wecht while Kevin Dougherty is the brother of Philadelphia’s top labor leader John Dougherty. The inclusion of such prominent names from the commonwealth’s two biggest cities guaranteed money, attention and votes.

The GOP, on the other hand, went with three relatively unknown nominees. Judith Olson serves on the Superior Court but Michael George was from Adams County, nowhere near the critical suburban counties around Pittsburgh and Philly. Finally there was Anne Covey, who was from SEPA and appealed to Penn State alumni. Her poor rating from the Pennsylvania Bar Association, however, overshadowed all that.

Ultimately, though, when speaking with Republican insiders one factor kept coming up again and again: money.

Since Supreme Court elections are vitally important statewide contests that fly below most people’s radars, money is extremely important.

“I hate to say you can buy them, but you can,” one Republican consultant told PoliticsPA.

The issue for Republicans is that they were badly out-fundraised. Democrats were well-funded by their constituencies, labor unions and trial lawyers, while the business community never showed up for the GOP. For instance, Super PACs were formed for the Democrats but none materialized for the Republicans.

“Our side didn’t show up,” another Republican operative told me. “You can’t get outspent 7-to-1, you can get the best candidates in the world but it won’t matter if you’re outspent 7-to-1.”

So why didn’t the money come? Fatigue and complacency are the best possible answers.

As another GOP insider pointed out, Democrats believe gerrymandered redistricting severely hurt them in 2010 and the Court would be their best avenue to fight back in 2020. Furthermore, many donors felt tapped out after the 2014 midterms, which were a major success for the Republican Party.

You could say the GOP were victims of their own substantial majorities in the legislature.

On the other hand, Democrats feel they have the advantage in any statewide race as they involve a larger and more diverse electorate.

Of course, motivation won’t be a problem next year, with Presidential, Senate, Attorney General and Congressional races on the ballot. As a result, the best way to find out if Election Night 2015 was a fluke is to watch the results of Election Night 2016.