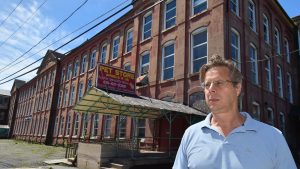 Businessman Nat Hyman announced this week his candidacy for Allentown City Mayor on the Republican ticket.

Hyman owns Landau Jewelry and runs a real estate development company specializing in converting old factories into apartments.  Hyman is the first Republican to enter the Mayoral race. But he hasn’t been in the GOP for long; he only switched his registration recently.

“I am committed to seeing Allentown realize its potential, restoring integrity to the Mayor’s office and providing an environment necessary for families and businesses not just to survive but thrive,” Hyman said in his announcement, a subtle dig at incumbent Mayor Ed Pawlowski.

Pawlowski already announced his bid for a fourth term in office, despite an ongoing FBI investigation into possible corruption – although he has not been named in the court filings.  Pawlowski has denied any wrongdoing in the case.

In a followup comment, Hyman’s campaign was even more direct.

“20 years of one party rule has led to corruption at the top and an ineffective city council resulting in an FBI investigation and several indictments. The people of Allentown know it’s time for a change,” said Jessica Banotai of the Lehigh County Republican Party.

“The beauty of our democracy is that anyone can run for office. I do find it curious he switched parties a week ago to run as a Republican especially in light of the fact that we have a solid Democratic majority in the city. It’s been 20 years since a Republican has sat in the mayor’s office and over a decade since we have had a Republican on city council,” Mayor Pawlowski said.

Despite all the contested Democratic primary, it will be an uphill battle for any Republican to win a general election in Allentown.

Pawlowski was re-elected with 62% of the vote against an independent challenger in 2013, with no Republican on the ballot.  In that race Pawlowski, who was simultaneously preparing a campaign for Governor, outraised his opponent by more than $200,000.

The last Republican Mayor of Allentown was William L. Heydt, who served from 1994-2002.

Notable in the event of a contested GOP primary, Hyman clashed with President Donald Trump over a business deal in the late 1990s and early 2000s. He appeared on CNN’s Anderson Cooper to discuss the lawsuit against Trump which ultimately settled out of court.