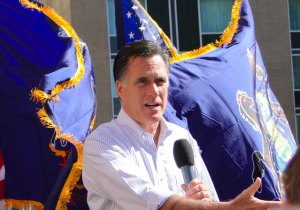 Mitt Romney visited the Universal Bluford Charter School in West Philadelphia Thursday to engage in a roundtable discussion about his three-pronged plan for better education: better teachers, better administrators and two-parent homes. Romney spent a portion of the talk defending cost-cutting education policies, namely the increasing of class size, to teachers participating in the event.

When he unveiled his education policy earlier this week, Romney emphasized a results-based approach and school vouchers.

“[Romney] will take the unprecedented step of tying federal funds directly to dramatic reforms that expand parental choice, invest in innovation, and reward teachers for their results instead of their tenure,” his campaign wrote.

Teachers questioned Romney’s assertion that there is no correlation between class size and student success rates. To defend himself, Romney cited schools in Cambridge, Massachusetts as examples as well as a study by McKinsey Global Institute. According to the education news source Education Week, however, and a 30-year study conducted in Tennessee, smaller class sizes are key to better education; teachers present at the charter school agreed.

As Governor of Massachusetts, Democrats charged Thursday, Romney cut education funding, increased class sizes, and drove up the cost of tuition, and his initiatives have led to teacher layoffs. He also had the second-largest per-pupil cuts in the nation during a single year. Philadelphia Mayor Michael Nutter was among those protesting Romney’s visit.

Romney’s visit to the Keystone State comes at a particularly interesting time as just yesterday, hundreds of protesters set to the streets in Pittsburgh in opposition to Gov. Tom Corbett’s education agenda—an agenda that bears resemblance to the one supported by Romney.

The Democratic Party of Pennsylvania released this statement and accompanying video seeking to link the two:

The Corbett-Romney plan for education is wrong for Pennsylvania and wrong for the country. Tom Corbett and Mitt Romney both have records of slashing funding for schools, increasing classroom sizes and driving up the cost of tuition. Throughout Pennsylvania we are seeing the negative impacts this has on middle-class families, and people are beginning to speak out against it in force. Students, parents and teachers are speaking out and standing up to Gov. Corbett’s cuts and they will see that Mitt Romney’s education plan is just more of the same failed ideas. As if Gov. Corbett’s education plan hasn’t done enough to hurt Pennsylvania schools and students, having a president in the White House with the same bad ideas and misplaced priorities would be devastating.

Supporters of the Romney education plan feel quite differently. Michigan Governor Rick Snyder made the following statement on Romney’s proposals for reforming education:

Here in Michigan, we approved tenure reform legislation that makes it easier to reward great teachers and remove ineffective ones from the classroom.  We also recently approved changes that will give parents and students more choices about where to attend school, including expanding options for online classes.  Mitt Romney will bring ideas like these to the national stage. As a proud nerd, I’m encouraged by Mitt Romney’s education reform plan.