In the Hunt for VP Nod, Portman Joins Rally in Lancaster 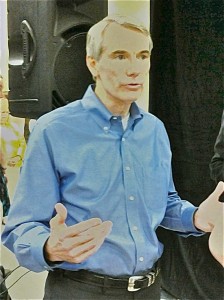 Lancaster — Rob Portman, a U.S. Senator from Ohio and possible VP choice for Mitt Romney, spoke at the GOP Victory Rally Monday in Lancaster County about why he believes America should vote the former Massachusetts Governor into the White House.

“Pennsylvanians are common-sense voters…Pennsylvania is going to come through,” Portman said during the low-key rally attended by about 200 people, amongst whom were loyal Republican voters and GOP elected officials from the area.

Though Portman may get the nod to be Romney’s running mate in November, the Senator spoke very little about himself. Indeed he sidestepped questions regarding his personal qualifications by saying, “I’m here representing Mitt Romney…not talking about myself,” he said.

“We vote for the President, not the Vice President.”

Instead he focused on what he sees as the most pressing issues facing America – namely the economy; how he believes that the current administration has exacerbated these issues; and why he feels Romney can lead America out of the current crisis.

Portman rattled off of a grocery list of disheartening statistics: rising unemployment, climbing poverty rates and declining manufacturing rates, among others. “Ten times as many people have left work during this administration than have entered it.”

He also claimed that over the duration of Obama’s term, “More people have gone on Social Security and Disability then have joined the workforce — nearly twice as many.”

He argued that as a businessman with private sector roots, Romney is more than qualified to rebuild the American economy.

“The unpredictability; the uncertainty in the economy today; the regulations; the higher taxes; the President out there saying he wants to raise them even higher. This is not how we turn things around.”

“But let me tell you why I’m ultimately optimistic: we’ve been here before…We’ve been through tough times as a country, but we always come out on top,” Portman said.

The event kicked off with comments from PA Rep. Scott Boyd (R-Lancaster), who emphasized the importance of “deliver[ing] a victory to Tom Smith, Mitt Romney and the rest of Republicans in Lancaster this year.”

Washington County Commissioner Diana Irey Vaughan, running for PA Treasurer, and Lancaster Commissioner Scott Martin both spoke. Vaughan, whose husband recently returned from a tour of duty in Afghanistan, compared the battle for the White House to a military battle for the life of the nation.

Focus then shifted to the Senate race between incumbent Bob Casey and GOP hopeful Tom Smith. Boyd threw a few darts at Casey, comparing the Senator to his father when he said, “Bobby is not Robert. That nut fell far from the tree.”

Smith stepped up to say, “The most important part of the upcoming election is standing right in front of me. It’s you. The grassroots.”

After strongly endorsing Romney, Smith said “I promise that every Republican on this ticket here in PA will work their hearts out, because we know the stakes…This is the most important election in my lifetime.”