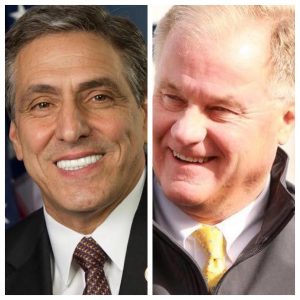 A new poll released today from Commonwealth Leaders Fund, a conservative group, shows GOP candidates for Governor and Senate are each trailing by less than 3 points to the Democratic incumbents.

Most polling has indicated that Wagner and Barletta trail their Democratic opponents by double digits.

Many candidates and causes release internal polling to inform the narrative of a campaign. Unlike most others, CLF conducted the poll in-house versus hiring a polling firm.

“When you look at the issues most important to voters in this poll, there’s no doubt why Scott Wagner is surging,” said Wagner campaign spokesman Andrew Romeo. “Taxes and Government Spending” was the most important issue for those polled, coming in at 30.8%.

The economy, healthcare, and education in that order followed as the next most important issues for those polled, all finishing with over 10%. Infrastructure and transportation, reforming state government, open space and environment, crime and safety, and social issues did not surpass the double digit threshold for most important issue.

“The more Pennsylvanians see the contrast between the candidates on these major issues, the more gains Scott (Wagner) will make, and we’re confident he will win in November,” Romeo said.

Commonwealth Leaders Fund, a PAC officially registered in December 2017, describes its mission on its homepage.

“We recruit, endorse, and raise money for candidates for state office who champion and lead on the fundamental American principles of free-enterprise, limited government, and personal responsibility,” the website states. “We invest in people who demonstrate the ability to lead the political and policy change that will create economic growth and opportunity for the people of Pennsylvania.”

The Wolf campaign does not see see the polling as relevant to the race.

Jeff Kendall, Chairman of the Commonwealth Leaders Fund, defended the polling released today and said he believes that Pennsylvania is “generally a conservative state.”

“Commonwealth Leaders Fund is conducting internal polls, and we may release more in the future,” Kendall said. “Pennsylvania is generally a conservative state, not necessarily a Republican state but culturally conservative. In the Northeast it is the only state that went for Trump, and if you look at the abortion and gun laws in Pennsylvania, it reflects its historic conservative bent.”

Kendall argued that most other polling outlets last released surveys two months ago, before the candidates weren’t releasing television ads for the general election. He was also very critical of two specific polling outlets, Suffolk and Franklin & Marshall.

BREAKING! A new independent poll has us trailing Senator Casey by ONLY 2 POINTS! Help us keep the momentum going by making a donation to our campaign here: https://t.co/JTBojr2PQL.

A Republican poll shows that in a dream scenario for Republicans @louforsenate still loses. #PASEN https://t.co/4SXKc1MLNK