noun. a formal discussion on a particular topic in a public meeting or legislative assembly, in which opposing arguments are put forward.

Verb. argue about (a subject), especially in a formal manner.

Tonight is “Debate Night in Pennsylvania.”

Both parties will have their candidates for the nomination for U.S. Senate on the stage tonight before a statewide audience.

The Democrats are up first at 7 p.m. in an event at Dickinson College in Carlisle sponsored by Spotlight PA and its founding members. 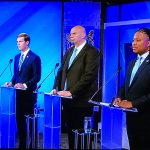 Fetterman did not look comfortable at last Thursday’s debate at Gettysburg College and seemed to struggle at times to respond to certain questions and attacks from Lamb and Kenyatta. One would imagine that he will be better prepared this evening and looking to avoid a major gaffe that could turn the primary chase around.

Lamb painted Fetterman as too risky a choice for Democrats in their quest to retain control of the U.S. Senate. Kenyatta hammered home his position that the former mayor of Braddock is not progressive enough.

When the subject of the 2013 shotgun incident comes up again – and it will – how will Fetterman handle the questioning? Will he apologize? Does he need to?

Other differences in the candidates’ positions will also be drawn out again, including fracking and legalizing marijuana for recreational use.

The wild card is the presence of Khalil, the Jenkintown Borough councilwoman, who was not on the stage last week. A former delegate for Bernie Sanders’ presidential campaign, she will help delineate the progressive viewpoints of Kenyatta, who embraces the label, and Fetterman, who has kept it at arm’s length. Khalil is also expected to champion Medicare for All.

The GOP takes center stage at 8 p.m. in a highly-anticipated debate that features five of the top candidates as determined by the event sponsor, Nexstar Media.

It will be the first time that the deep-pocketed duo of Mehmet Oz and Dave McCormick will meet on the debate stage and they will be joined by Carla Sands, Kathy Barnette and Jeff Bartos.

ABC27’s Dennis Owens and WPXI’s Lisa Sylvester will moderate from the WHTM-TV studios in Harrisburg. 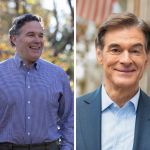 Although Oz and McCormick appeared together earlier this month in Erie, this is the first time the duo are together for a formal debate.

“Everybody has a plan until they get punched in the mouth,” said boxer Mike Tyson. And that’s one of the key things to watch for tonight. Oz seemed genuinely surprised and uncomfortable at some of the attacks sent his way during the Erie forum. McCormick, not a target at that event, could see things headed his way in Harrisburg. Sands, Barnette and Bartos might make noise going after Oz but may make more headway in the race by making McCormick defend his positions under pressure.

Expect to hear the phrase “America First” a lot during the 90 minutes. Oz has the endorsement of former president Donald Trump, but the other candidates have not been shy about burnishing their credentials as well.

Of the other three candidates, Barnette has shown the most momentum and her roots as a hard-hitting conservative commentator will serve her well tonight. Bartos, in a self-deprecating style, has spoken about his grassroots appeal, while Sands lays claim to being the only candidate on stage to have served in the Trump administration as ambassador to Denmark.