It’s Game On in Greensburg Tonight 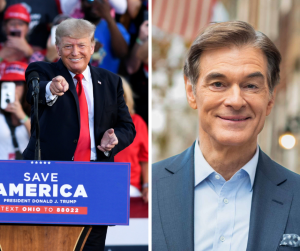 Will he or won’t he?

That is just one of the subplots as former president Donald Trump holds a rally tonight in Greensburg, located approximately 30 miles east of Pittsburgh.

The event is described as a Save America Rally and will be held at the Westmoreland Fairgrounds beginning at 8 p.m. and is anticipated to draw as many as 20,000 people.

Trump will be joined by recently endorsed U.S. Senate candidate Mehmet Oz, as well as House representatives John Joyce (R-13) and Mike Kelly (R-16), and GOP House candidate Jim Bognet (PA-08). Supporters – and opponents – want to hear what Trump has to say and what impact his words have on the upcoming races.

But the real intrigue centers on whether Trump will endorse any of the Commonwealth’s candidates for governor.

Lou Barletta, Jake Corman, Doug Mastriano, and Dave White, in particular, have been courting Trump for his endorsement – an endorsement that has risen in value after JD Vance’s victory in the Ohio senate primary. Vance will also speak at the event.

Oz has been vocal on the debate stage about the support received from the 45th president and the gubernatorial candidates are hoping for the same, given the relative tightness of the race. In a recent Franklin & Marshall College poll, Mastriano has pulled ahead by eight points over former U.S. attorney Bill McSwain, who Trump gave an “anti-endorsement.” Mastriano, the state senator from Franklin County and election denier, has led five of the last six polls focused on the PA governor’s race and has a 1.3 point average advantage.

Barletta, the former mayor of Hazleton, was one of Trump’s earliest supporters in 2016, while Corman, president pro tempore of the PA Senate, was close to dropping out of the race before a conversation with Trump pulled him back from the brink. White, a Delaware County businessman who supported Marco Rubio in 2016, says he is a supporter of Trump’s America First agenda.

Trump supporters have made a point of showing off his 55-0 record with regard to picking candidates. It should be noted that 33 of those candidates were in Texas and were prohibitive favorites to win their race, such as Texas governor Greg Abbott.

The nod to Oz, the celebrity surgeon, and the endorsement of Sen. David Perdue in the Georgia GOP governor’s race will be real tests of the “Trump mark,” as Oz held a slender two-point lead over challenger David McCormick in the F&M poll while Perdue trailed by a considerable margin.

With 39 percent of the respondents indicating they were still undecided as to a Pennsylvania senate candidate, tonight could go a long way toward tilting the scale in the Keystone State chase.

The event will be the first political rally conducted on the grounds, which hosts the county’s annual fair each August, said Sarah Sphon, secretary for the Westmoreland Fair board of directors, to TribLIVE.

“They reached out to us and worked out the details,” Sphon said.

She declined to disclose the financial terms of the deal to rent the fairgrounds.

The weather forecast for the event is not good, as the National Weather Service is predicting showers and a possible thunderstorm with temperatures in the low 60s.