Good Wednesday Morning. Time to get down to work.

What We’re Hearing
“You, the good people of Pennsylvania, will always be my north star.” – Josh Shapiro

Visit us online at PoliticsPA.com
Are you getting this newsletter forwarded to you? Sign up for free and get your own subscription emailed to you every weekday morning. Join the PoliticsPA community.

Joshua David Shapiro, 49, became the Commonwealth of Pennsylvania’s 48th Governor on Tuesday on the steps of the Capitol Complex.

Shapiro was sworn in by Debra Todd, chief justice of the Pennsylvania Supreme Court, just after noon on Tuesday. He took the oath of office on three bibles held by his wife, Lori – each with personal and spiritual meaning to the family, including one from the Tree of Life Synagogue in Pittsburgh. (PoliticsPA)

Shapiro Takes Oath Of Office As PA’s New Governor. “Democrat Josh Shapiro took the oath of office Tuesday to become the 48th governor of Pennsylvania, placing his hand on a stack of three Jewish Bibles at an inaugural ceremony outside the state Capitol to cap his blowout win in November’s election.” (Associated Press)

Josh Shapiro Took Harrisburg. Is D.C. Next? “When Josh Shapiro took the oath of office Tuesday on a trio of Bibles, he didn’t just become the leader of Pennsylvania government. He also cemented his status as a national figure many expect to become a future candidate for president.” (Philadelphia Inquirer)

Gov. Josh Shapiro Takes Office With A Burst Of Energy, Optimism. “Pennsylvania’s state government made a generational change Tuesday with the inauguration of Joshua David Shapiro as the state’s 48th governor.” (PennLive)

Team Shapiro: Here Are Some Of The People Who Have The Ear of The New PA Governor. “New Pennsylvania Gov. Josh Shapiro has an expansive list of friends and contacts after a generation in politics and government.” (PennLive)

Davis, 33, served as a state representative during the last session of the General Assembly but will now serve as president of the state Senate, chair of the Board of Pardons and on the Pennsylvania Emergency Management Council. (PoliticsPA)

‘A Symbol Of Our Progress’: PA Has Sworn In Its First Black Lieutenant Governor. “Pennsylvania has its first Black lieutenant governor. Lt. Gov. Austin Davis, 33, took the oath of office Tuesday in front of the state Senate, where he’ll preside for the next four years. Davis, the state’s 35th lieutenant governor, is now the highest-ranking Black official in the state’s history.” (Philadelphia Inquirer)

Austin Davis Sworn In As PA’s 35th, First Black Lieutenant Governor. “Former Allegheny County state Rep. Austin Davis was sworn in before the state Senate on Tuesday as the 35th lieutenant governor of Pennsylvania and the first Black Pennsylvanian to hold the office.” (Pennsylvania Capital-Star) 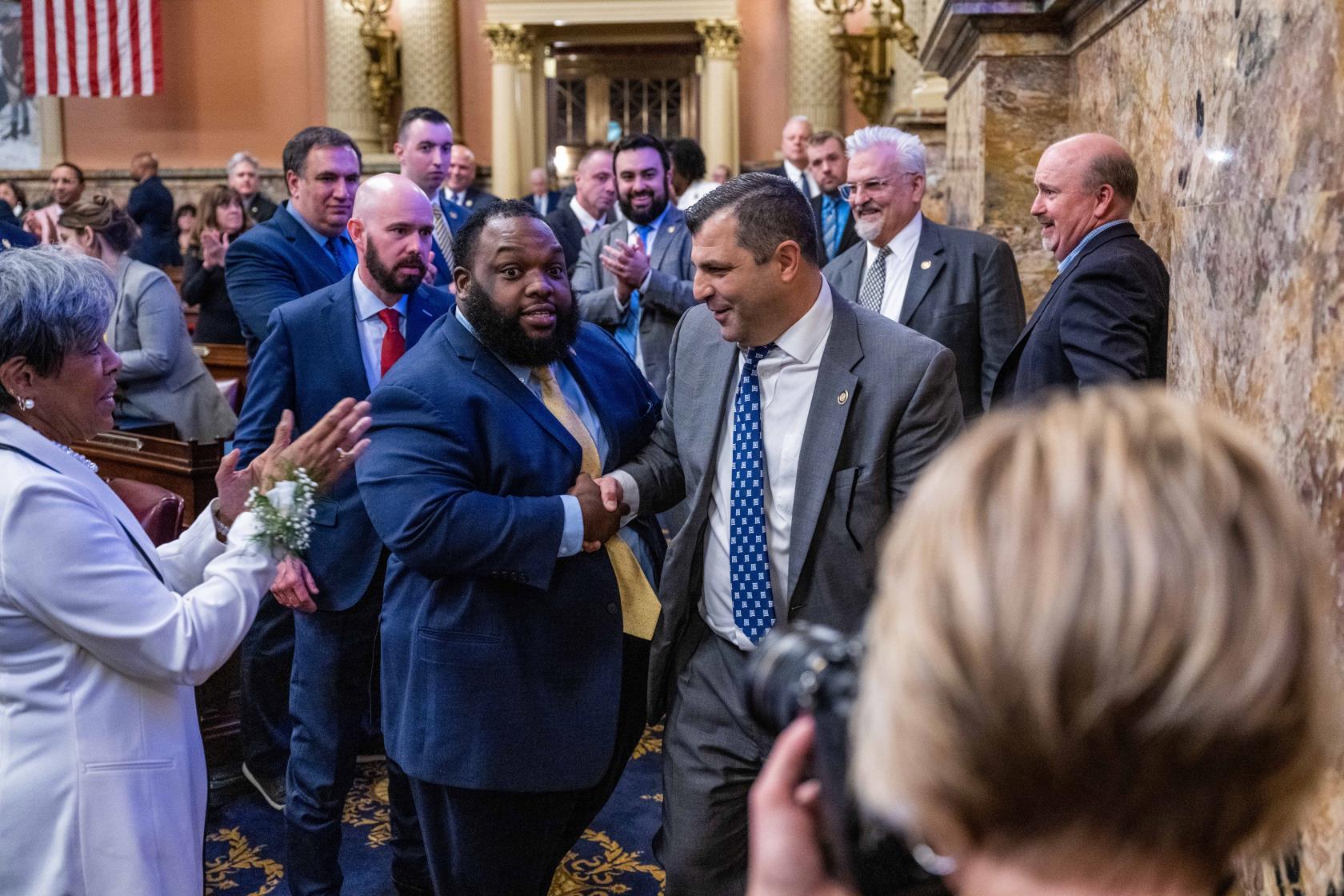 “The new speaker of the Pennsylvania House said Tuesday that the first meeting of a bipartisan work group he assembled got off to a good start and that he’s hopeful they will help bridge the chamber’s partisan divide.” (Associated Press)

Doug Mastriano Misses Senate Vote, Skips Josh Shapiro’s Inauguration. “Josh Shapiro was sworn in as governor on Tuesday before a crowd that included both Republican and Democratic lawmakers. Notably absent was the man he defeated for the job: State Sen. Doug Mastriano.” (WITF)

Berks County GOP Wants To Oust ‘Country Club Republicans.’ “The certified letter from the Berks County Republican Committee arrived at Daniell Urban’s house while she and her family were on vacation. Urban and her husband had just won election to the committee during the May 2022 primary. But upon reading the message, they discovered the party might not be greeting them with open arms.” (Bucks County Courier Times)

Twitter Storm Hovers Over Allegheny County Council Race Between Hallam, Doven. “A race for an at-large seat on Allegheny County Council had barely gotten underway this month when attacks started flying. Many of them came from observers of the race on social media, particularly Twitter, and almost immediately put the race’s two candidates on the defensive.” (Tribune-Review)

A glance around the Keystone State at editorials and opinions.

“The concert celebrating the inauguration of Pennsylvania’s new governor Josh Shapiro, like the rest of the festivities held on the evening of Jan. 17 at Rock Lititz, attempted to showcase the best of Pennsylvania.

For example: the food being served included, among many other options, Pennsylvania regional specialties like tomato pie, scrapple and waffle bites, Primanti Bros. sandwiches and a full cheesesteak station. Dessert choices included whoopie pies, Tastykakes and Eat’n Park smiley cookies along with baklava and cheesecake.” (PennLive)

Thanks for starting your day with us.
What did you think of today’s newsletter?
Please invite your friends to subscribe to the PoliticsPA Playbook