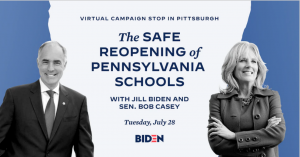 Screenshot from a link to the Biden campaign event.

Dr. Jill Biden will be virtually returning to the Keystone State on behalf of her husband’s presidential campaign on Tuesday.

According to a release from former Vice President Joe Biden’s campaign, Jill Biden, along with Sen. Bob Casey, and President of the Pittsburgh Federation of Teachers Nina Esposito-Vigitis will make a virtual campaign stop in Pittsburgh on Tuesday afternoon to discuss the safe reopening of Pennsylvania schools.

“Members of the Pittsburgh community will also join the event to discuss how a plan to safely reopen schools is essential to the health and safety of their community,” according to the release.

In May, Jill Biden made a “virtual swing” through the state to discuss COVID-19 related topics.

The Trump campaign accused Biden and Democrats of opposing students returning to school for “political purposes.”

“It’s shameful that Joe Biden and his Democrat allies are perfectly okay with obstructing children’s access to quality education and their parents’ return to the workplace just for political purposes when there is so much more at stake,” said Trump campaign spokesperson Samantha Zager. “Keeping our schools closed puts children at risk mentally, physically, and emotionally, and results in students falling behind while their parents scramble to make ends meet. With experts agreeing it’s time for a safe return to in-person learning, this isn’t a political issue and the Biden campaign needs to stop treating it as such.”

The topic of reopening schools in the fall is emerging as a key issue to the upcoming election.

CNBC reported on July 16 that voters in six swing states (including Pennsylvania) “overwhelmingly want schools to reopen, but many think holding in-person classes will be unsafe as the coronavirus pandemic rips through the United States, according to a new CNBC/Change Research poll.”

A Gravis Marketing poll of Pennsylvania likely, registered voters showed that those in the state support reopening schools for in-person instruction in the fall, although they believe that it will lead to an increase in Coronavirus-related deaths.

According to the analysts at FiveThirtyEight, Gravis Marketing favors Democrats by an average of 0.9% and has an overall C grade. Despite the slight Democratic lean, 43% polled considered their political ideology as very or somewhat conservative, while 36% described themselves as moderate, and only 20% said that they were very or somewhat liberal.

Trump’s campaign also has virtual and in-person events slated for the state this week. On Monday night, Kimberly Guilfoyle, National Chair of the Trump Victory Finance Committee, will lead a “Catholics for Trump” virtual event in PA. On Thursday, Vice President Mike Pence will headline a “Cops for Trump” event in Westmoreland County, followed by a conversation on America’s economic recovery following the coronavirus in Somerset County.