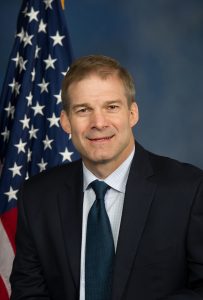 One of the leading conservative voices in Congress is coming to Pennsylvania to fundraise for three county republican parties and for a fellow GOP Congressman.

Rep. Jim Jordan (R-OH) will be headlining a joint dinner for the Blair, Huntingdon, and Bedford County Republican Party’s on Sept 16 at the Altoona Grand Hotel. In addition to being the keynote speaker for this event, Jordan’s stop in Blair County also includes attending a fundraiser for Rep. John Joyce (R-Blair).

“He’s a founding member of the Freedom Caucus, obviously a person who is at the heartbeat of the Republican Party,” Blair County Republican Committee Chair Jim Foreman said to PoliticsPA. “And what Jim Jordan stands for and his principles are pretty central and consistent to what conservative Blair County and Huntington and Bedford County conservative Republicans represent.”

The Blair County Democratic Party described the choice of inviting Jordan to headline an event as “ill-conceived,” while referencing Jordan who was accused of being aware of sexual misconduct from a team doctor while he was a former assistant wrestling coach at Ohio State University. Jordan claims he was vindicated after an investigation released in May found “no hard evidence” that Jordan or other coaches knew of the doctor’s “rampant sexual misconduct,” although some wrestlers who worked with Jordan continue to say he and other coaches were aware of the “predatory behavior” from the doctor, according to the New York Times.

“We understand that committees often want big-name speakers at their events, but in light of the PA GOP’s recent issues, inviting someone accused of covering up sexual abuse seems an ill-conceived choice of guest-speaker at best,” Blair County Democratic Committee Chair Gillian Kratzer said to PoliticsPA.

The Blair County GOP did not respond to the statement from Kratzer about Jordan.

The dinner begins at 6 pm with tickets costing $25 per person. Tickets are available until the end of Wednesday and can be purchased by contacting the Blair County Republican Committee. The event is expected to draw 250-300 people.