Joe and Jill Biden To Campaign In Bucks and Luzerne Counties 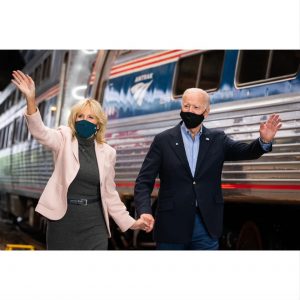 The Bidens will be returning to the Keystone State on Saturday to campaign in two battleground counties.

According to a release from the Biden campaign, former Vice President Joe Biden and his wife, Dr. Jill Biden, will be traveling to Bucks and Luzerne Counties on Saturday to talk about “building back the economy better for working families and encourage Pennsylvanians to make a plan to vote.”

The former VP’s most recent visit to the state was in Philadelphia last Thursday night, when he fielded questions from Pennsylvania voters during an ABC News town hall.

Two weeks ago, the former VP delivered an address in Gettysburg calling for national unity, while he visited Erie just four days after to tout his economic agenda. The previous week, Biden made multiple stops in western PA as a part of the campaign’s “Build Back Better Express” train tour. Sen. Kamala Harris’s last campaign visit in the state was on Sept. 17 in Philadelphia.

It’s been a busy week of campaigning in the commonwealth for the GOP presidential ticket as well.

President Donald Trump made an appearance in the Keystone State this week when he hosted a rally in Erie on Tuesday night, while Vice President Mike Pence is slated to make his third visit to the state this week for a rally in Allegheny County on Friday afternoon.

The previous Tuesday night, Trump made his first visit to the state in October when he hosted a rally in Johnstown. Prior to that visit, Trump’s most recent appearances in the state were in the last full-week of September when he held rallies in Harrisburg and Pittsburgh. Trump was slated to meet with firefighters in Philadelphia two Sundays ago after IAFF Local 22 endorsed Trump over Biden, but the event was cancelled after the president tested positive for COVID-19.

According to the Doylestown Intelligencer, Trump is expected to make a visit to Bucks County next week as well at the Pennridge Airport.

Recent polling indicates that Biden has an advantage over Trump in the state. The Real Clear Politics Average shows Biden besting Trump by 4.9 points in Pennsylvania.