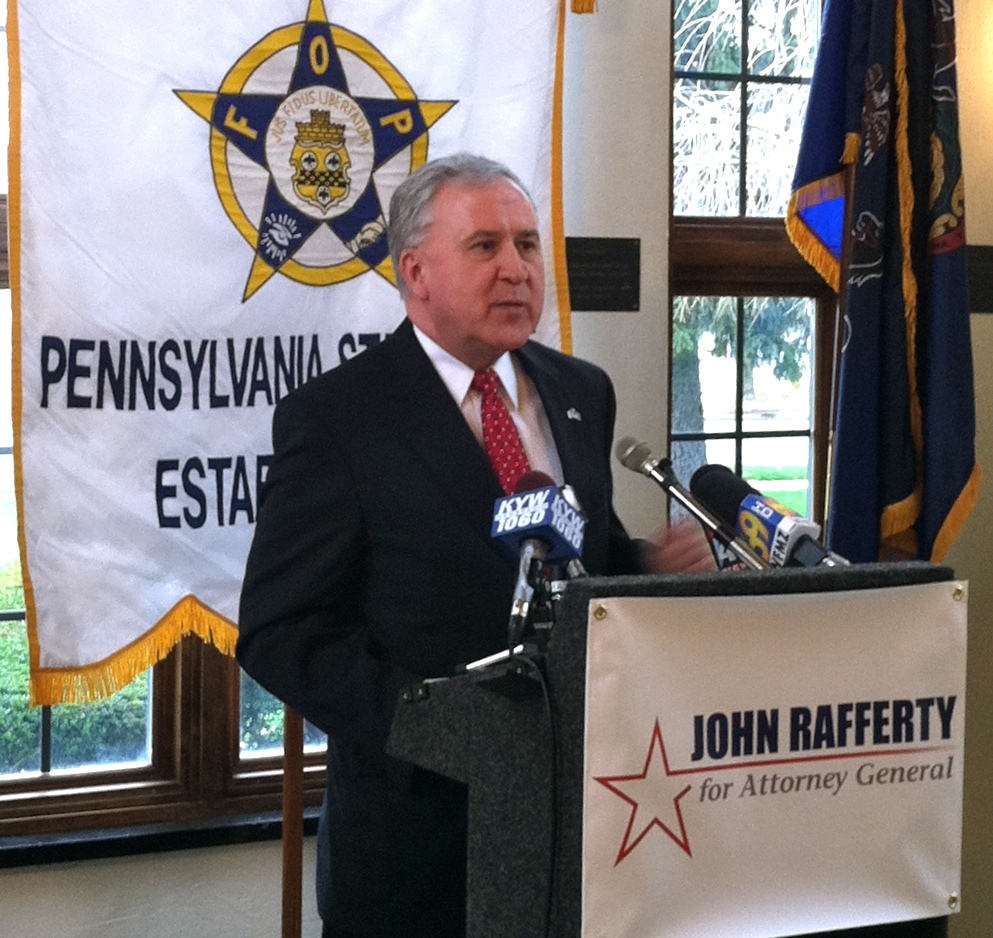 Political observers refer to the campaign for Pennsylvania Attorney General as a “résumé race.” John Rafferty’s credentials were on display as the State Senator and former Deputy AG officially announced his bid Wednesday morning.

“As a prosecutor, also with some civil experience, as a businessman, and as a legislator who has been very active in writing legislation beneficial to the citizens of Pennsylvania – that unique blend lends to being the Attorney General,” said Rafferty.

At the FOP Lodge in Harrisburg, Rafferty was flanked by representatives of the state police and firefighters, who endorsed him at the event.

The Montgomery County native served as in the AG’s office from 1988 to 1991 under LeRoy Zimmerman and Ernie Preate. He went into private business for several years, and returned to the statewide scene in 2002 when he successfully ran for the Pa. Senate seat of outgoing Congressman Jim Gerlach. While there, he’s written, sponsored, and supported a variety of anti-crime measures. He is not up for re-election until 2014.

Rafferty referred to the ongoing Penn State scandal and said he wanted to build on the success of Governor Tom Corbett and AG Linda Kelly. The PA Independent took a detailed look at that aspect of the conference.

Rafferty is the only announced GOP candidate, but it looks like Cumberland County District Attorney Dave Freed is waiting in the wings. He has reportedly had recent fundraising success and is highly regarded by Pa.’s statewide network of prosecutors.

“I continue to talk to people about the race and continue to be encouraged by colleagues and members of state committee and legislators,” Freed wrote in an email to PoliticsPA. “I will make my intentions clear very soon.”

Freed is relatively young and has the reputation of a team player. If Republican state committee supports Rafferty (which it almost certainly will), Freed is likely to respect the endorsement.

Another rumored GOP candidate is Washington County District Attorney Steve Toprani. The 32-year-old is credited with cleaning up the ethically challenged DA’s office since winning election in 2007 and is well-liked among southwestern Pa. Republicans.

Toprani said he was still in the exploratory phase of his candidacy and is considering a run. He also said he respects the endorsement process and would support the party’s nominee regardless.

Montgomery County DA Risa Ferman is officially out of the running, reports Jeremy Roebuck of the Philadelphia Inquirer.

While Rafferty’s campaign team is still coming together, he has a number of early advantages. The Senate GOP typically looks after its own and has a strong built-in fundraising network. Even so-called outsiders within the caucus, like Sens. John Eichelberger and Mike Folmer, have given Rafferty their full-throated support.

The Republican Party’s establishment has begun to rally around him. National GOP committeeman and mega-donor Bob Asher recently sent a letter to state committee members asking their support on his behalf.

“John is my friend and a Senator in my home county,” Asher wrote. “I know him extremely well and know he possesses the right requirements for this extremely important job.”

Known as a southeast Pa. moderate, Rafferty is prepared to reach out to conservatives in the party. He visited activists at the Pennsylvania Leadership Conference early this year, and his campaign literature boasts that he will, “work with Tom Corbett to fight the implementation of Obamacare.”

But he shouldn’t pick out new drapes for the AG’s office just yet. Rafferty’s fundraising is about on par with Freed’s – he had about $100,000 cash-on-hand as of his most recent finance report. It’s a drop in the bucket compared to the $1 million cash on hand of Patrick Murphy, a former congressman and Democratic candidate for AG. And asked about Corbett’s support in the race, he said he had spoken with the Governor and that’s where things stood.

He’ll also be a big target for the other party. The PA Democratic Party put out a statement within a few minutes of Rafferty’s announcement, and had a staffer on hand to film the event.

“John Rafferty is a typical Harrisburg politician who puts special interests ahead of Pennsylvania families,” said spokesman Mark Nicastre. “[He] hasn’t helped families as a state senator, and he certainly won’t stand up for them as Attorney General.”

The AG’s office has been in GOP hands since it first went up for a vote in the early 1980s, and Republicans have an automatic advantage the race. In the 2008 Democratic wave year when Barack Obama won Pa. by over 600,000 votes, Tom Corbett sailed to re-election by a margin of 400,000.

In a general election, Rafferty is poised to run the standard, law-and-order style campaign that has worked for Republicans in the past.

If Rafferty is the sole Republican on the ballot next April, and the Democrats have a race past the state committee’s endorsement and all the way to the primary, he will likely have a major fundraising advantage.

Kane and McCaffery were more welcoming.

“My comment for Sen Rafferty is ‘welcome to the race!’” said Kane. “As for my campaign, the people of Pa are really responding to my qualifications as a veteran prosecutor who specialized in child sexual assault cases and public corruption.”

“John Rafferty is a good man,” said McCaffery. “A dedicated public servant with a long and distinguished courtroom career. I look forward to the campaign and a free exchange of ideas to protect Pennsylvania’s families.”

Current AG Linda Kelly, who was appointed to compete Corbett’s term, has ruled out a run for the office this year.