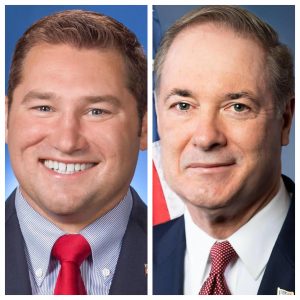 A pair of Pennsylvania Republicans will serve on a newly formed 15-member GOP committee that is aiming to “help reinforce Congressional efforts to counter current and emerging cross-jurisdictional threats from China.”

Both Joyce and Reschenthaler issued statements describing the opportunity to serve on the committee as an “honor,” while emphasizing the importance of the work ahead of them and referencing the coronavirus pandemic.

“In the wake of the coronavirus pandemic, it is imperative that America continues to strengthen our supply chain, pursue fairer trade deals with China, and hold the Chinese Communist Party accountable for its actions,” Joyce said in a statement. “As the only physician serving on the task force, I am looking forward to delving into opportunities to strengthen and protect our supply chain for pharmaceuticals and other critical medical equipment, especially personal protective equipment (PPE). Americans simply cannot be beholden to the Chinese Communist Party to provide our health care supplies. I am grateful to Leader McCarthy for offering me this opportunity to serve the American people in this capacity.”

“For too long, China has stolen American intellectual property, violated international trade laws, exported illicit fentanyl into our local communities, and committed heinous human rights abuses,” Reschenthaler said in a statement. “American workers, particularly right here in southwestern Pennsylvania, too often pay the price for China’s unfair trade practices. The work of this task force is more important than ever to get to the bottom of China’s role in the origin and spread of COVID-19.”

McCarthy pointed to Joyce’s background as a physician for selecting him to serve on the committee and said that the Blair County Republican brings a “deep knowledge of our medical system to a task force whose first priority is to figure out how we can bring our medical supply chain back to America. McCarthy detailed Reschenthaler’s military service in his statement to his appointment on the committee, while describing the Allegheny County Republican as a “rising star in the Republican Party.”

According to the Washington Post, top leaders from both parties in the House worked to “form a bipartisan committee to oversee congressional strategy on China” for more than a year, but Democrats decided in February to not move forward with the project because the issue became too politicized.

“We are very cognizant of the need to hold China accountable for its actions,” a senior Democratic aide said in the Washington Post story. “But to the extent this is going to be the Trump administration’s scapegoat for its utter failure, we are not going to go along with that.