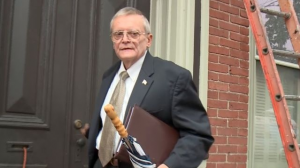 Former Harrisburg Mayor Stephen Reed caught a bit of a break today when the judge in his case threw out most of the criminal counts against him.

Senior Judge Kevin Hess removed all charges relating to Reed’s time in office which amounted to 305 of the 449 charges he’s facing (it was originally 499).

Nonetheless, the 144 remaining relate to the historical artifacts that were found during the infamous raid of Reed’s home back in June 2015.

Attorney General Kathleen Kane later revealed that among the items Reed took were a suit of armor, sarcophagus and a “vampire hunting kit”.

The prosecution is expected to appeal the ruling.