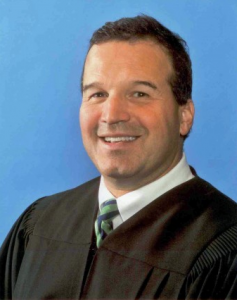 Philadelphia-based Judge Luis Felipe Restrepo can finally begin hearing cases in his new role on the U.S. Court of Appeals for the Third Circuit, more than a year after his nomination.

The Senate voted Monday to confirm Restrepo’s nomination, 82-6, seven months after his last appearance in front of the Senate Judiciary Committee.

“I’m pleased that Judge Restrepo’s nomination to the Court of Appeals was approved by the Senate in a broad, bipartisan vote,” Sen. Bob Casey wrote in a statement. “Judge Restrepo has earned his sterling reputation as a lawyer and a jurist, and will now continue his service on one of the highest courts in the nation.”

“It is great news for Pennsylvania that Judge Restrepo will soon serve our nation on the Third Circuit Court of Appeals,” Sen. Pat Toomey wrote. “As both a federal magistrate and district judge, Judge Restrepo has served the people of Pennsylvania honorably and with distinction and will continue to do so.”

Though Casey and Toomey were both celebratory in their joint press release, Restrepo’s 14-month limbo points to a much bigger problem in the federal judicial system.

There are 77 judicial vacancies across the country, with 33 considered emergencies by the Administrative Office of U.S. Courts. Thirty-four nominees are pending confirmation by the Senate.

Only 11 federal court nominees were confirmed by the Senate in 2015, the least since 1960.

“Justice delayed from lack of judges is justice denied,” said Glenn Sugameli, founder of the Judging the Environment judicial nominations project, with the number of vacancies up by more than 50% over the last year.

“There is no justification for the extreme delay of today’s Senate vote on Judge Restrepo’s over-one-year-old nomination to fill a U.S. Courts-declared judicial emergency vacancy,” Sugameli said.

Vermont Sen. Patrick Leahy – current ranking member and former Chairman of the Judiciary Committee – hit out at his GOP colleagues for their attempts to stall judicial nominations made by Pres. Obama.

“The lengthy delay that Republicans subjected Judge Restrepo to was completely unnecessary, but it is the result of Republicans’ wholesale obstruction of judicial nominees,” Leahy said in a statement after vote. “Their actions hurt not only the people of Pennsylvania, but also Americans across the country as judicial vacancies have remained unfilled nationwide after Republicans took over the Senate majority last year.”