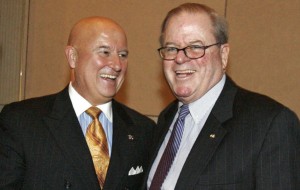 The personal feud between Chief Justice Ron Castille and Justice Seamus McCaffery of the Pennsylvania Supreme Court has now officially boiled over.

McCaffery released a statement today to the press in reference to the pornographic emails he received and sent.

“Unfortunately, personal, private emails between me and some longtime friends were never meant to be viewed by anyone else, but they were,” he wrote. “I sincerely apologize for my lapse in judgment. I erred and if I offended anyone, I am truly sorry.”

McCaffery then quickly transitioned, however, into why he felt this issue had become such a big controversy.

“This latest cooked-up controversy over my personal emails is part of a vindictive pattern of attacks by the soon-to-be-retired Chief Justice, Ronald Castille,” he asserted. “He is fixated on taking down a fellow justice with his misleading statements and incredible hypocrisy. Isn’t it time for the press to ask the real question? Why is the Chief Justice fixated on hurling one accusation after another at me, in an ongoing attempt to discredit me? We all know what is motivating this unwarranted and unprecedented attack.”

That motivation, according to Justice McCaffery, is the Chief Justice. In fact, McCaffery unleashed such a long list of accusations against Castille that this section of the statement must be presented in full:

“Ron Castille’s statement yesterday, issued on AOPC letterhead and purporting to represent the position of the entire Supreme Court, was a lie. In fact, members of the Supreme Court did not even know about the statement until they read the publication. And it is only the latest lie in the Chief Justice’s egomaniacal mission to ‘get me.’ His mission began when he reported me to the Federal Bureau of Investigation over my wife’s legitimate receipt of referral fees, and that didn’t work. He has done everything possible within our Court to undermine me with my colleagues, and that didn’t work. Now, with only two months left in the hourglass of his tenure on our Court, he is trying to finish what he has been trying to do for so many years. He has been on this mission because I had the guts to challenge him on the Family Court fiasco and on what the citizens of Pennsylvania got for the more than $3 million of First Judicial District funds that were funneled to one of his closest friends. And I had the guts to challenge him on his disastrous handling of Pennsylvania’s worst judicial scandal and a tragic injustice that will forever be known as the ‘Kids for Cash’ disaster.

The letter finishes with another statement about his regret for the emails.

The animosity between the two Justices is not a surprise but they public nature that the feud has taken is rather shocking.

It is worth questioning how these two men will be able to sit on the Court together if only for the rest of the year. Outside of every else, though, it should be entertaining.