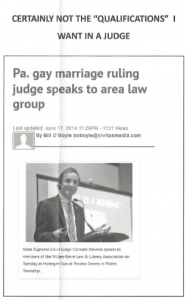 Stevens contacted the group that used the photo, the Lebanon 9-12 project, and they issued a correction. Still, the Justice wants PA GOP Chair Rob Gleason to investigate whether any of Stevens’ primary opponents were behind this.

Justice Stevens’ letter to Chairman Gleason is included below:

Please note I request an immediate investigation into unethical campaign behavior and possible mail fraud in the primary campaign for the Supreme Court of Pennsylvania.

I ask for a written statement from each of the endorsed candidates and their respective campaign chairman, as well as any party officials, as to if they had any knowledge or participation in the matter.

Specifically, a doctored photograph has been disseminated with my picture suggesting I was the judge who decided a controversial case when, in fact, it was in federal court, not in the Supreme Court on which I am a Justice.

Clearly, this was done by someone intending to influence the Primary election and who has knowledge of the legal system.

The case itself does not matter.

What matters is that if such action was taken with the knowledge or consent of any candidate, the unethical campaign behavior should be made known and disavowed by the Republican Party as such an individual is not qualified to be on the Supreme Court.

Jim Rodkey of the Lebanon 9-12 Project discovered he was sent a doctored photograph indicating I was the judge who decided the case involving overturning the ban on same sex marriages and unknowingly disseminated the false information. (The Lebanon 9-12 Project opposes that court decision.) When I mentioned to him the case was in federal, not state, court, to his credit he immediately send out a corrective newsletter.

Again, it is not the case that matters, it could be any case. What matters is that someone with knowledge of the law, the courts and the campaign process is unethically trying to influence the process. And this is exactly the kind of person we do not need on the Pennsylvania Supreme Court.

Justice Stevens was appointed in May 2013 after the resignation of Joan Orie Melvin. He is running for re-election this year but did not seek and did not receive an official party endorsement.

Update: Chairman Gleason has sent the following letter in response to Justice Stevens:

“I received your letter regarding the alleged dissemination of a doctored photograph of yourself to potential voters.

Your letter is the first time our Party and staff have heard of this alleged incident, and we have no knowledge of the existence of the aforementioned photograph.

Making accusations against individuals, or, in this case, our Party, without evidence, could potentially set a dangerous precedent of unjustified accusations in the future that unfairly impugn the integrity of others.

Lastly, I will remind you that the Republican Party of Pennsylvania is not an investigative body, and I advise you to take any evidence that you may have regarding this matter to the appropriate authorities.”​